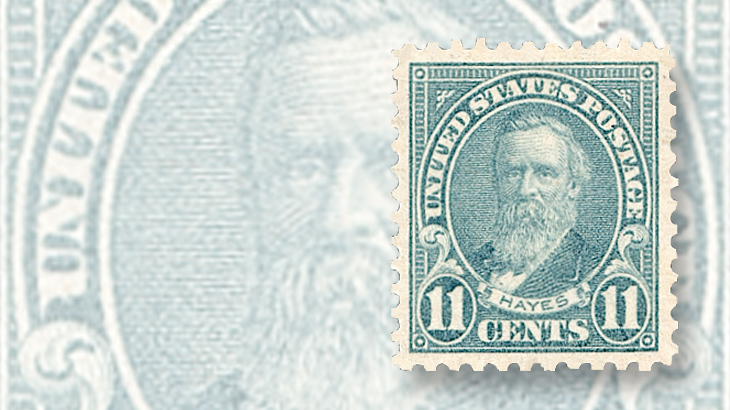 Rutherford B. Hayes, the 19th president of the United States, was honored on an 11¢ stamp issued in 1922 to mark his 100th birthday.

The 19th president of the United States, Rutherford B. Hayes, was born Oct. 4, 1822, in Delaware, Ohio, just north of the state’s centrally located capital, Columbus.

Hayes studied at Kenyon College and Harvard Law School, and established himself as a successful lawyer in Cincinnati.

In 1852 he married Lucy Ware Webb; her White House biography notes that her husband “soon came to share her deeply religious opposition to slavery.”

As the Civil War began, Hayes, at age 38, joined the 23rd Regiment of Ohio Volunteer Infantry and was promoted to the rank of major. Hayes and the 23rd joined the Army of the Potomac in 1862. Hayes led his forces into the Battle of South Mountain, where he was shot in the arm. He was eventually promoted to brevet major general, and returned to Ohio at the end of the war.

By that time he had already been nominated by the Republican Party to represent Ohio’s Second Congressional district, and he won the election, joining the House of Representatives in 1865. He was elected governor of Ohio in 1867 and was re-elected in 1869. After enjoying a brief retirement, Hayes was nominated for governor again in 1875 and won a third term.

Nominated as the Republican presidential candidate in 1876, Hayes defeated the Democratic New York governor Samuel J. Tilden in one of the closest and most dramatically contested elections in United States history.

With Reconstruction ending, Hayes sought to protect the rights of black citizens and heal a nation still struggling in the aftermath of the Civil War. Hayes also promoted Civil Service reform and blunted efforts by Congress to weaken the president’s power.

Hayes chose not to run for a second term as president; he and Lucy returned to their home in Fremont, Ohio, in 1881.