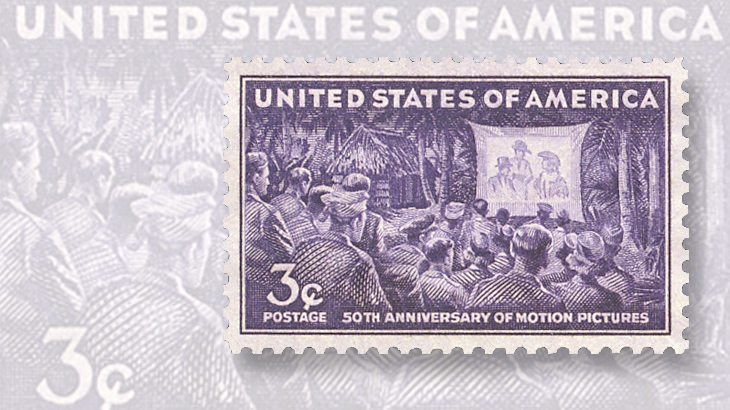 A 1944 stamp commemorating the motion picture shows members of the armed forces watching a film while stationed in the South Pacific.

Oct. 6 is considered by many to be the day that motion pictures were born. On Oct. 6, 1889, the kinetoscope was perfected and used to show a motion picture in the Thomas Edison laboratory for the first time. The machinery was developed by William K.L. Dickson.

Exactly five years later, on Oct. 6, 1894, the kinetoscopes had their public debut in Washington, D.C., according to Robert K. Headley in Motion Picture Exhibition in Washington, D.C. Headley reports that seven Edison Studio films were sent to theaters with the machines.

And on Oct. 6, 1927, the first feature-length “talkie” was publicly screened. Moviegoers at the Warners’ Theatre in New York City viewed The Jazz Singer, starring Al Jolson, with dialog and songs synchronized to the motion picture.

A 3¢ stamp commemorating the 50th anniversary of motion pictures was issued Oct. 31, 1944, at the Hollywood Station in Los Angeles, Calif., and in New York City.

A description by the U.S. Post Office Department stated that the vignette depicts “the showing of a motion picture in a native setting in the South Pacific before an audience comprised of members of the armed forces.”