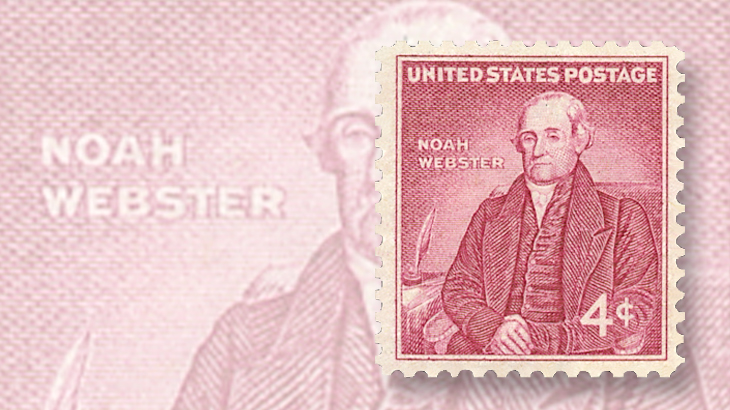 Noah Webster, perhaps the world's most famous lexicographer, on a 4¢ stamp issued for his 1958 birth bicentennial.

Noah Webster, who was born Oct. 16, 1758, in Hartford, Conn., is best known as a lexicographer who published his first dictionary in 1806. But his efforts to reform and standardize English spelling began many years earlier with a series of spelling and grammar textbooks published beginning in 1783. This significant work, A Grammatical Institute of the English Language, was popularly known as the “Blue-backed Speller.”

Webster attended Yale University at age 16. A strong proponent of American independence, he joined the Connecticut militia during the Revolutionary War but did not see active duty. After his graduation he worked as a teacher but also wrote and published articles in support of American independence and the new Constitution. He was also an important voice in establishing copyright laws in the United States that would protect his later work.

Webster was the editor of the Federalist Party newspaper in the 1790s while compiling and shaping his A Compendious Dictionary of the English Language. This work was followed in 1828 by the more detailed An American Dictionary of the English Language, which used modified and simplified American spellings of words such as “color” rather than “colour,” and “music” instead of “musick.”

Following a religious conversion in 1808, Webster moved from Connecticut to Massachusetts and helped to establish Amherst College.

After Webster’s death in 1843, his work was purchased by George and Charles Merriam in Springfield, Mass., resulting in the company that today is known as Merriam-Webster, and which continues to publish updated dictionaries and other reference texts.