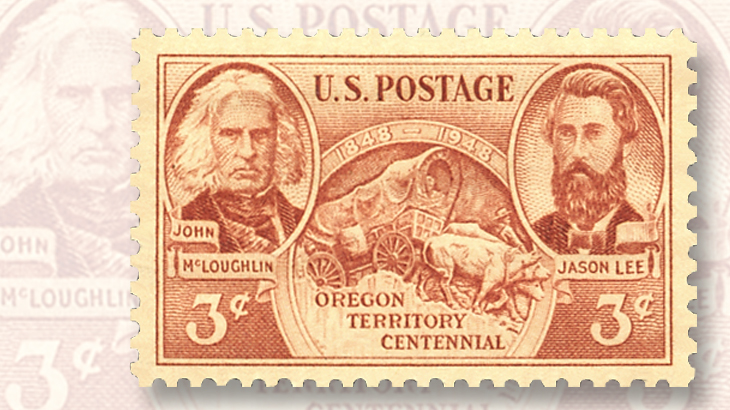 A leader in the establishment of the Oregon Territory, John McLoughlin is shown at left on this 3¢ commemorative from 1948.

John McLoughlin, a medical doctor, fur trader, and community leader in the Pacific Northwest, has been referred to as the “Father of Oregon.” He was born Oct, 19, 1784, in La Riviere du Loup, Quebec, Canada.

He joined the North West Company as a physician at Fort William on the northern shore of Lake Superior, and became a partner in the company, which would merge with Hudson's Bay Company in 1821.

Three years later, McLoughlin represented the company in the Columbia District and built Fort Vancouver, where he supervised a vast trade in furs, timber, and more. In 1842, he established the town of Oregon City, where he later lived and became mayor.

McLoughlin maintained peaceful relations with the Indians, who called him “Great White Eagle” for his imposing stature and mane of white hair. He aided settlers arriving in the Northwest, including Methodist missionary Jason Lee, who was also instrumental in developing the region.

McLoughlin is honored along with Lee on the 3¢ stamp issued Aug. 14, 1948, to commemorate the 100th anniversary of the establishment of the Oregon Territory (Scott 964).