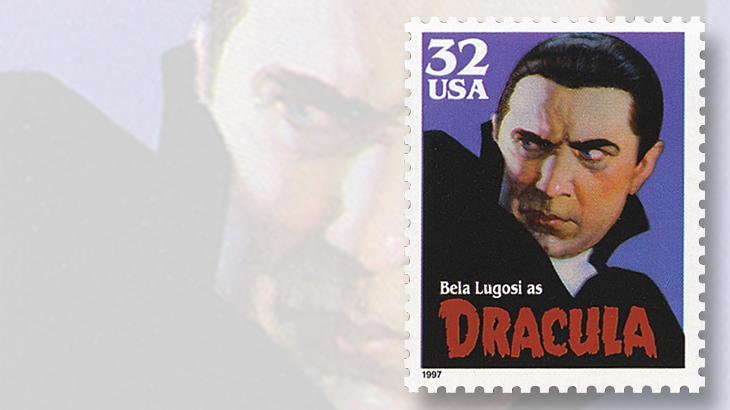 Actor and stamp collector Bela Lugosi was honored in his role as Dracula on a 32¢ stamp from 1997.

Bela Lugosi, the actor famous for portraying the vampire Dracula in the 1931 film by the same name, was born Bela Ferenc Dezso Blasko on Oct. 20, 1882, in what is now the city of Lugoj, Romania.

Lugosi starred in or was featured in more than 100 films, including several made in Hungary around 1915. His earliest U.S. appearances included The Silent Command in 1923, but he will forever be associated with Count Dracula, a role he first undertook in the 1931 film by Tod Browning based on Bram Stoker’s 1897 horror novel.

Lugosi was also an enthusiastic stamp collector and a member of the American Philatelic Society. In Gregory William Mank’s 2009 book Bela Lugosi and Boris Karloff: The Expanded Story of a Haunting Collaboration, there is a delightful picture of Lugosi showing his stamp collection to actress Anne Nagel, who appeared with him in the 1940 science fiction film Black Friday.