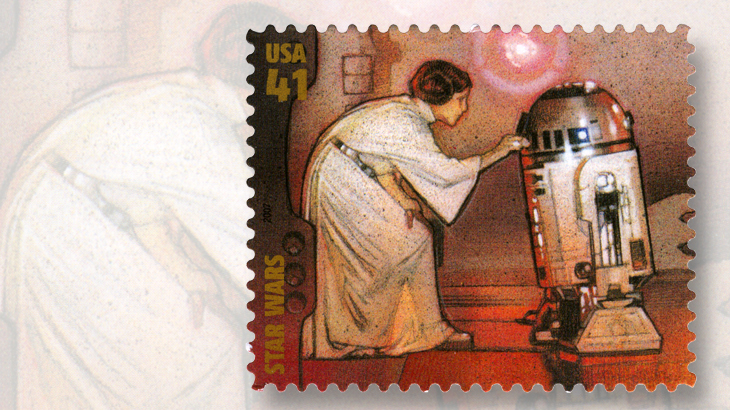 Carrie Fisher starred as Princess Leia in the first three Star Wars films; her character was immortalized on a 41¢ stamp in 2007.

Carrie Fisher has appeared in many different film roles, and is also the author of several bestselling books, including Postcards From the Edge (1987), Wishful Drinking (2008), and her latest, a memoir titled The Princess Diarist (2016).

Despite her full resume, Fisher is best known for her role as Princess Leia Organa — later Gen. Leia Organa — in the three Star Wars films released between 1977 and 1983, and the 2015 movie Star Wars: Episode VII — The Force Awakens. She is also expected to feature in the next film in the series, Star Wars: Episode VIII, which has an anticipated release date at the end of 2017.

She also appears in The Blues Brothers (1980), Hannah and Her Sisters (1986), and When Harry Met Sally (1989), and has been featured in numerous other film and television roles.

The United States Postal Service issued a set of 15 Star Wars stamps on May 25, 2007 (Scott 4143). The stamp depicting Princess Leia with the astromech droid (or robot) R2-D2 (4143f) shows her as portrayed by Fisher in the films.