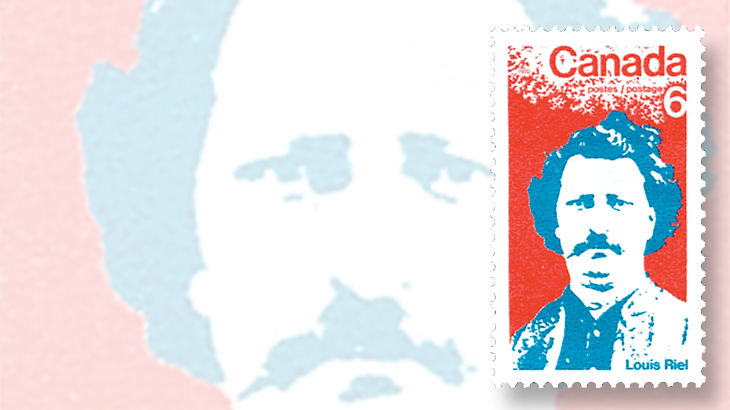 On June 19, 1970, Canada Post issued a 6¢ stamp (Scott 515) honoring Louis Riel, described in the Scott Standard Postage Stamp Catalogue as a Metis leader who became president of the Council of Assiniboia in 1870.

Riel was born Oct. 23, 1844, in the Red River Colony, part of what is now southern Manitoba. He became a spokesman and leader for the Metis people — who were descended from a blend of European and aboriginal ancestry — to defend the rights of the Metis when the government of Canada sought to develop the region.

Tensions between the Metis and the government in 1870 led to the armed uprising known as the Red River Rebellion. Riel was a key figure in the negotiations to end the fighting, which resulted in the creation of the Manitoba province as part of the Canadian confederation.

But fearing for his life, Riel then went into exile in the United States and became an American citizen.

He returned years later to aid the Metis in what is now Saskatchewan in their negotiations with the federal government. Riel was captured during the ensuing Northwest Rebellion in 1884, charged with treason against the Canadian government, and hanged on Nov. 16, 1885.