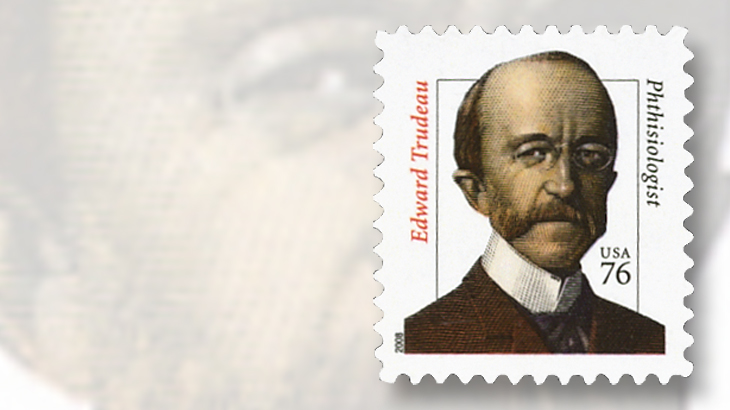 Edward Trudeau, a leader in the early treatment of tuberculosis, was honored in 2008 on a 76¢ stamp in the Distinguished Americans definitive series.

Edward Livingston Trudeau, a key figure in the early fight against tuberculosis, was born Oct. 5, 1848, in New York City. His father and grandfather were both physicians, and Trudeau’s older brother James lost his life after contracting tuberculosis, a serious communicable lung disease.

Trudeau studied at the College of Physicians and Surgeons at Columbia College (now Columbia University), earning his medical degree in 1871. Two years later, he was married with a growing family when he contracted tuberculosis himself.

His prescribed course of treatment was to retreat to the Adirondack Mountains, where fresh air and exercise aided him in his full recovery. After researching and experimenting with tuberculosis treatment options, he opened a sanatorium in the Adirondacks specifically for tuberculosis patients.

In Linn’s U.S. Stamp Yearbook 2008, George Amick reported that Linn's columnist John M. Hotchner, then a member of the Citizens’ Stamp Advisory Committee, was an advocate for a U.S. postage stamp to honor Trudeau.

Amick quoted Hotchner as stating that “Trudeau was the father of the sanatorium movement, a researcher who made key discoveries about the diagnosis and treatment of tuberculosis, a founder of a voluntary public health organization that collects money and funds education, research and treatment and served as a model for much of today’s public health advocacy system.”

The 76¢ Edward Trudeau stamp was issued May 12, 2008, in the Distinguished Americans definitive series (Scott 3432A). An inscription on the stamp identifies Trudeau as a phthisiologist — a doctor who specializes in the treatment of tuberculosis.