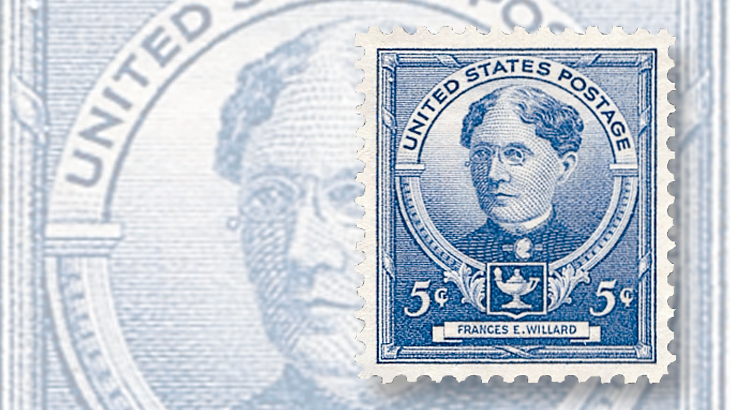 Educator and suffragist Frances E. Willard, honored in 1940 on a 5¢ stamp in the American Educators set.

The first woman honored in the National Statuary Hall in the United States Capitol was Frances E. Williard, an educator who was a leader in the women’s suffrage movement, and in the temperance movement that would lead to Prohibition in the United States in 1920, more than two decades after her death.

Willard was born Sept. 28, 1839, near Rochester, N.Y., though as a child her family moved to Oberlin, Ohio, and then Janesville, Wis.

She studied at Woman’s College of Northwestern University and then taught for several years before accepting the position of president of the Evanston College for Ladies, and later, dean of women at Northwestern.

She joined the Woman’s Christian Temperance Union and became its corresponding secretary, lecturing extensively on the subject of liquor prohibition. After resigning her position with the university she worked with evangelist Dwight L. Moody before accepting the presidency of the national WCTU in 1879.

She promoted a woman’s right to vote with the slogan “Home Protection” to stress that voting could protect women from crimes against them such as abuse by men influenced by alcohol. She additionally fought for fair labor laws and economic equality.

Along with lecturing and writing, Willard organized the Prohibition Party and became president of the National Council of Women (with Susan B. Anthony as vice president).

A 5¢ stamp honoring Frances E. Willard was issued March 28, 1940, in the American Educators set of the Famous Americans series (Scott 872).