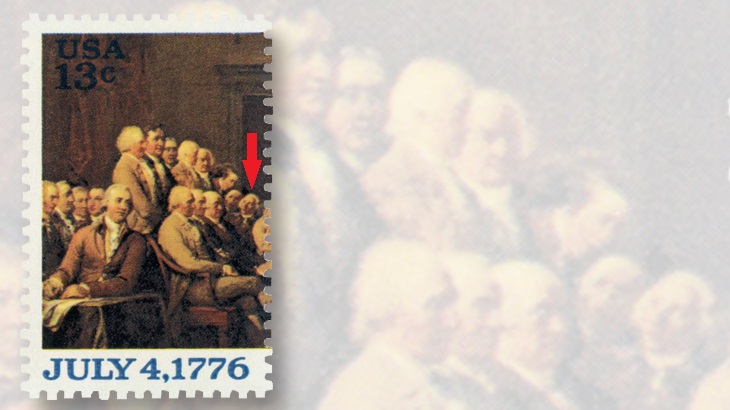 Founding Father Charles Carroll is shown on a 1976 stamp celebrating the Declaration of Independence.

Charles Carroll, sometimes referred to as Charles Carroll of Carrollton to distinguish him from similarly named relatives, was a signer of the Declaration of Independence, and later a United States Senator from Maryland. He was born Sept. 19, 1737, in Annapolis, Md.

Carroll attended college in Maryland and in France before studying civil law at the College of Louis le grand in Rheims. He became a wealthy landowner and planter, and was involved in protests against British taxation of the colonies. He initially published his comments using a pseudonym, because as a Roman Catholic he was prohibited at the time from engaging in political activities by the government Maryland.

Carroll was a member of the Annapolis Convention from 1774 to 1776, and then was elected to the Continental Congress, where he signed the Declaration of Independence.

He was a member of the Maryland senate from 1777 to 1800, and was also elected to the U.S. Senate in 1789. When Maryland enacted a law prohibiting individuals from holding both offices simultaneously, Carroll resigned his U.S. Senate seat.

Carroll lived to the age of 95, and was the last surviving signer of the Declaration of Independence before he died on Nov. 14, 1832.

John Trumbull's 1818 oil painting Declaration of Independence shows the scene when the first draft of the document was presented to the Second Continental Congress. The painting first appeared on a 24¢ stamp in 1869 (Scott 120), and has appeared on other stamps since.

In 1976 the painting was depicted across four 13¢ stamps in a configuration known as a quadripartition.

Charles Carroll is seated at far right in the group shown on the first stamp in that 1976 issue (Scott 1691). He is individually honored on two pale green stamped postal cards issued in 1985: a nondenominated (14¢) U.S. domestic rate card issued Feb. 1 (UX105), and a card with a printed 14¢ denomination issued March 6 (UX106).

A philatelic birthday tribute to the Declaration of Independence