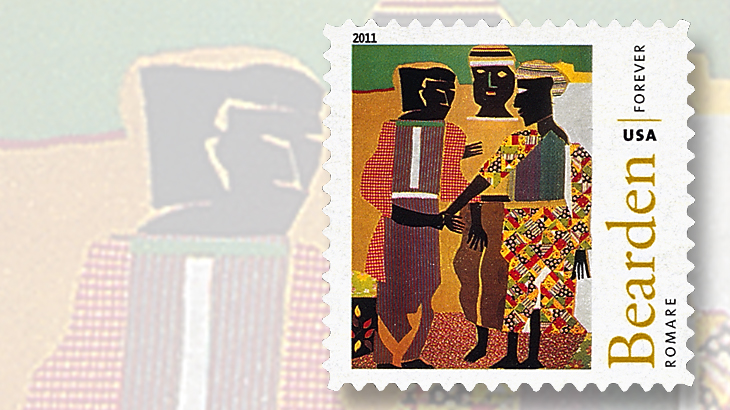 Artwork by Romare Bearden titled Conjunction is featured on one of four stamps issued to honor the artist in 2011.

Information about the artist and his work was printed on the back of the 16-stamp pane, beginning with this biographical sketch:

“Romare Bearden (1911-1988), one of the 20th century’s most distinguished American artists, is celebrated for his groundbreaking approach to collage along with his work in watercolors, oils, and other media. His work has been praised for depicting African-American experience in its full dimensions and for its eloquent expression of universal human themes.”

Bearden earned a degree in education from New York University and continued his involvement with the Art Students League after his graduation. After serving in the U.S. Army during World War II, he studied in France before returning to New York, where he worked as a caseworker with the New York City Department of Social Services.

The National Gallery of Art has noted, “The complex and colorful art of Romare Bearden is autobiographical and metaphorical. Rooted in the history of western, African, and Asian art, as well as in literature and music, Bearden found his primary motifs in personal experiences and the life of his community.”