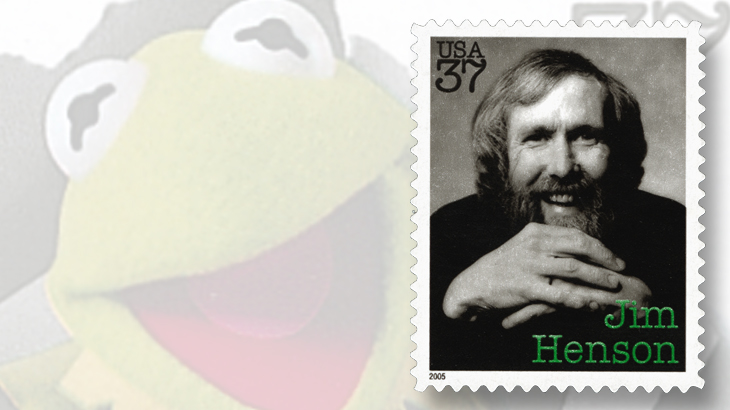 Jim Henson, creator of Kermit the Frog and the popular Muppet characters, was honored on a 37¢ stamp in 2005.

Puppeteer and entertainment developer Jim Henson, the creator of the Muppets, was born James Maury Henson on Sept. 24, 1936, in Greenville, Miss.

Henson developed his love of puppets as a child and formed his own entertainment business, the Jim Henson Co., in 1958. His Muppet lineup developed with appearances on local television programs and network commercials, including the characters Kermit the Frog, Rowlf the Dog, Cookie Monster and others.

Henson was involved in the development of the children’s program Sesame Street, which debuted on the Public Broadcasting Service in 1969 and introduced new characters such as Big Bird, Bert and Ernie, Oscar the Grouch and Elmo to help youngsters prepare for school and learn life skills while being entertained with songs and stories.

The Muppet Show, developed for an audience of older children and adults, was introduced in Great Britain in 1976 and became popular worldwide, making entertainment stars of Kermit, Miss Piggy, Fozzie Bear and other Muppet characters. That success led to a series of Muppet feature films and other motion pictures, including The Dark Crystal (1982) and Labyrinth (1986).

Henson died suddenly at age 53 on May 6, 1990, after developing severe complications from bacterial pneumonia.

The United States Postal Service paid tribute to Henson on Sept. 28, 2005, with an unusual 11-stamp pane that included one 37¢ stamp honoring Henson, and 10 others showing some of his most popular Muppet characters (Scott 3944).