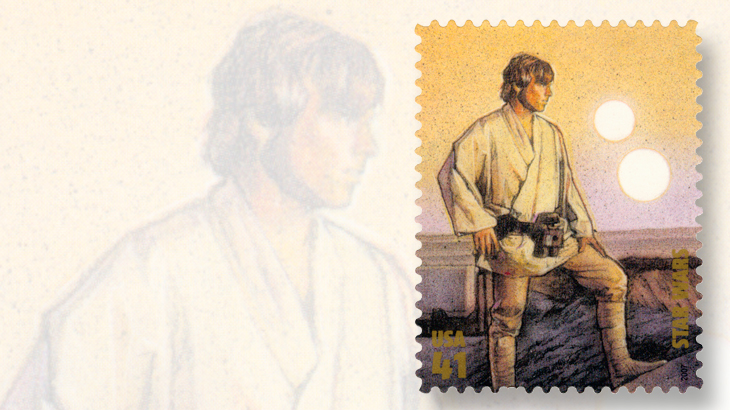 Luke Skywalker, as portrayed by Mark Hamill in the Star Wars films, on a 41¢ stamp from 2007.

Mark Richard Hamill was born Sept. 25, 1951, in Oakland, Calif., and studied drama at the Los Angeles City College Theatre Academy. He landed guest roles on several television series and had a recurring role on the TV daytime drama General Hospital before auditioning for and landing the part of Luke Skywalker.

Star Wars, which was later rebranded as Star Wars: Episode IV — A New Hope, was released in 1977 to unprecedented worldwide popularity, and Hamill’s fame was cemented with the similar success of the two follow-up films.

Though he is forever associated with Luke Skywalker, Hamill has taken on many varied film roles over the years. He is also known as a versatile voice actor acclaimed for his performances as the Joker, arch-nemesis of Batman in Batman: The Animated Series and associated spinoff productions and video games.

The United States Postal Service issued a set of 15 Star Wars stamps on May 25, 2007 (Scott 4143). The stamp depicting Luke Skywalker (4143e) shows him as portrayed by Hamill in the films.