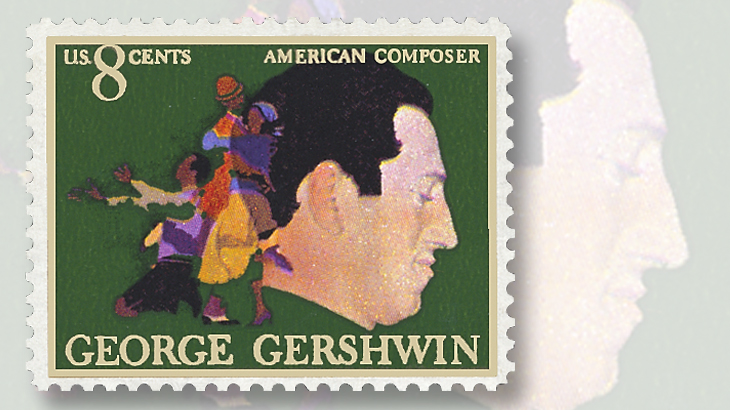 American composer George Gershwin has been personally commemorated on two United States stamps. The first was this 8¢ stamp issued in 1973.

The wonderful music that George Gershwin created during his brief lifetime passed into the great American songbook long ago, and will be treasured there as long as people are entertained by music.

His brother Ira was almost two years older, and the family would include younger brother Arthur and sister Frances.

George studied piano as a youngster and began performing professionally at age 15 after dropping out of school.

A gifted composer, his most frequent collaborator was his brother Ira, and together they wrote popular standards such as I Got Rhythm, Embraceable You, Let’s Call the Whole Thing Off, Nice Work if You Can Get It and They Can’t Take That Away from Me.

Many of their works were composed for Broadway musicals, including Lady Be Good in 1924 and Funny Face in 1927.

George also composed Rhapsody in Blue, a work for piano and jazz band (and adapted for orchestra), plus the 1935 opera Porgy and Bess, written with Ira Gershwin and DuBose Hayward, and other orchestral works and film scores

Porgy and Bess was commemorated on a 29¢ booklet stamp issued in a Broadway Musicals set on July 14, 1993.