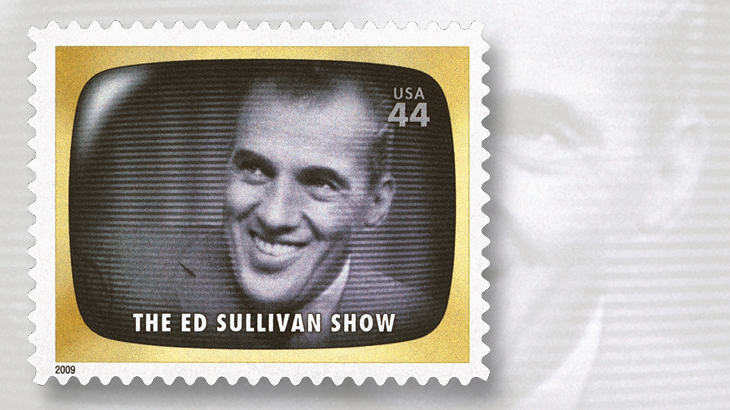 Newspaper columnist and television host Ed Sullivan appeared on a 44¢ stamp issued in 2009.

As the host of his own television variety program from 1948 to 1971, Ed Sullivan was an important leader in the entertainment field and a television pioneer.

Edward Vincent Sullivan was born in Harlem, New York City on Sept. 28, 1901. After a stint as a sportswriter, he was hired by the New York tabloid The Evening Graphic to report the news from Broadway. The New York Daily News became his home after that, and his column Little Old New York ran in the paper for 42 years.

Often serving as master of ceremonies for high-profile entertainment gatherings, he was picked to host the early CBS television variety program Toast of the Town, which debuted June 20, 1948, and slowly became a popular Sunday night fixture. Eventually it was renamed The Ed Sullivan Show as a tribute to its host’s own star power.

For each new show, Sullivan gathered together some of the hottest names in show business for an hour-long eclectic mix of music, dance, comedy and more. Classical music and Broadway show scenes appeared on the same program as plate spinners, sports stars and fast-talking comedians. Sullivan hosted an early television appearance by Elvis Presley in 1956, and the Beatles in 1964. He was known for providing national TV exposure for black entertainers denied such opportunities elsewhere, and he welcomed acts as diverse as blues-rock singer Janis Joplin and Senor Wences, the latter a brilliant ventriloquist who painted a face on the side of his fist to serve as a head for his dummy partner.

Sullivan’s weekly show won a Golden Globe award in 1959 and a Peabody award in 1967. The CBS-TV Studio 50 theater on Broadway where his show took place each week was renamed The Ed Sullivan Theater in 1967.