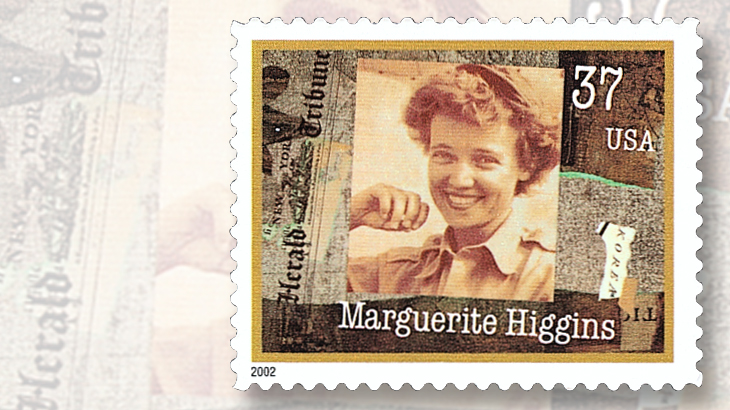 Marguerite Higgins, honored on a 37¢ stamp in the 2002 Women in Journalism set.

Groundbreaking United States war correspondent and news reporter Marguerite Higgins was born Sept. 3, 1920, in Hong Kong, the daughter of a U.S. businessman who was a World War I veteran, and his wife, a teacher from France.

Higgins grew up in California and attended the University of California Berkeley, where she graduated in 1941. She studied further at Columbia University and was named the campus correspondent for the New York Herald Tribune.

She continued her work with the Herald Tribune after earning her master’s degree in 1942, and in 1945 she reported from the Dachau concentration camp in Bavaria as Allied troops arrived to liberate its prisoners. She was named the paper’s Berlin bureau chief, and later served as bureau chief in Tokyo.

Higgins reported from the Korean War after convincing Gen. Douglas MacArthur to rescind a ban on female correspondents, and won a Pulitzer Prize in 1951 for international reporting. She reported many important international news stories in a career that continued until her death in 1966 from leishmaniasis, a disease she contracted in Vietnam the previous year.