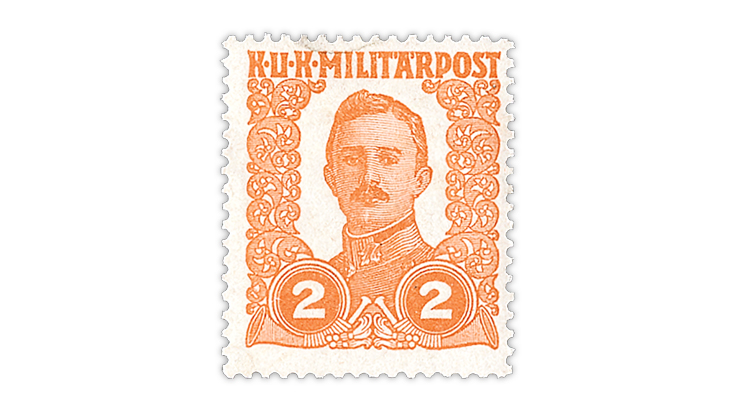 The 1918 Bosnia and Herzegovina set of 13 Emperor Karl I stamps (Scott 128-140) is hard to find and well worth full Scott Classic Specialized Catalogue of Stamps and Covers 1840-1940 value or more in unused hinged condition.

Since the late 19th century, this small country with a population of about 3.5 million has been one of the most troubling and most troubled places on the planet.

Conquered by the Turks in 1463, it became part of the Ottoman Empire. It was one of the few places in Europe where large numbers of the native Christian population converted to Islam. In the final years of the 19th century, it had a mixed population of Bosniaks (Slavic Muslims), Orthodox Christian Serbs and Roman Catholic Croats.

Under the Treaty of Berlin of 1878, Bosnia and Herzegovina remained nominally a province of the Ottoman Empire, but was occupied and administered by Austro-Hungary.

In 1908, the Habsburg Empire infuriated the Serbs in Serbia and Bosnia by unilaterally annexing the province. This led to the assassination by a Bosnian Serb of the heir apparent to the Austro-Hungarian Empire on the streets of the Bosnian capital, Sarajevo, touching off World War I and inaugurating a century of bloodshed and warfare in the country.

In November 1918, World War I was drawing to a close with Austro-Hungary on the losing side. A set of 14 Bosnia and Herzegovina Emperor Karl I stamps (Scott 128-141) was prepared. The stamps were not issued in Bosnia, but they were sold at the Vienna, Austria, post office for a few days after the armistice of Nov. 11, 1918. We previously tipped this set in the Sept. 25, 2017, issue of Linn’s.

This is a difficult set to find, and it is well worth Scott catalog value or more in unused, hinged condition. A mint, never-hinged set is a good buy in the $275 to $300 price range.

The high-value 1-krone stamp (Scott 141) is not valued with the rest of the set. It has a catalog value of $1,900 in unused, hinged condition and $3,000 in mint, never-hinged condition. The values are in italics because this is a truly scarce stamp that is rarely seen or offered for sale.