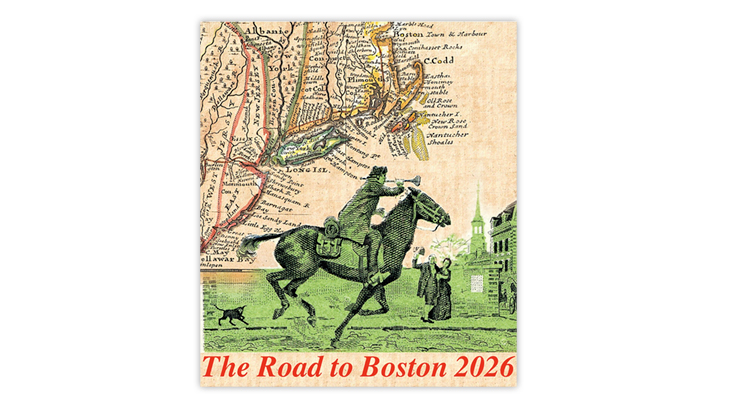 This Boston 2026 World Expo promotional label will be unveiled Aug. 12 at the Great American Stamp Show in Rosemont, Ill. It is the first in a series of limited edition Boston 2026 labels created by stamp designer Chris Calle.

Representatives of the Boston 2026 World Expo will conduct an informational meeting during the Great American Stamp Show to be held Aug. 12-15 at the Donald E. Stephens Convention Center in Rosemont, Ill., a suburb of Chicago. The hour-long meeting is scheduled for Thursday, Aug. 12, at 2 p.m. in a location to be announced later.

Boston 2026, the 12th international philatelic exhibition of the United States, is planned for May 23-30, 2026, at the Boston Convention and Exposition Center in Boston, Mass.

The Aug. 12 meeting will include a presentation on progress to date followed by a question and answer session.

The gathering will feature an unveiling ceremony for the first in a series of limited edition Boston 2026 show promotional labels created by stamp designer Chris Calle.

Boston 2026 corporate officers and organizing committee members have been active in several areas during the past year.

An initial show layout was prepared and included in a request for proposal sent to prospective decorator firms now under consideration.

Prospective dealers are encouraged to contact bourse chair Mark Reasoner (mark.reasoner@boston2026.org) to be added to an informational email list for news when available.

Discussions are underway with mints to produce show medals.

An outline for the Boston 2026 membership drive is being reviewed with specifics to be announced in the upcoming months, and a newly revised website is expected to go live by mid-August.