Did this ‘Bottle Mail’ cover have a close encounter with Hurricane Carol? 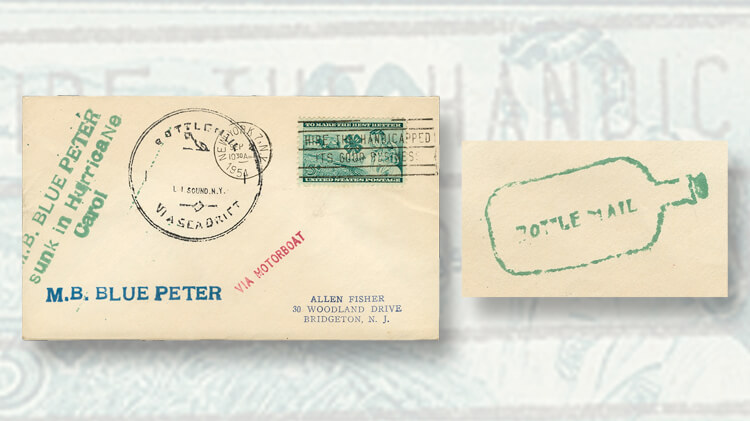 Was this cover aboard the M.B. Blue Peter when it sank, or had it been released in a bottle before Hurricane Carol hit? In addition to the markings on the front, there is a “Bottle Mail” handstamp shaped like a bottle on the reverse.

The progression of events recorded on the “Bottle Mail” cover is not entirely clear, but the hurricane to which it refers was frighteningly real.

Named Carol, it started near the Bahamas on Aug. 25, 1954, and strengthened as it moved northwestward, hitting Long Island as a category 3 hurricane with peak winds of 115 miles per hour.

Winds on the island gusted to 125 mph, leaving thousands of homes without power, many downed trees, and more than 1,000 damaged houses. Cars, boats, and other property also were lost. There was even more devastation in other locations.

Among the boats lost was the M.B. Blue Peter (the M.B. stands for motorboat), which according to the cover was sunk in Hurricane Carol.

From the handstamp that reads “Bottle Mail, L/I. Sound, N.Y., via sea drift,” I surmise that the boat was to take this and other covers out into the Long Island Sound, and then they would be released in a bottle. I might have it wrong, though. In fact, it is possible that the covers were never even placed aboard Blue Peter.

Since the storm hit Aug. 31, and the cancellation date is Sept. 2, one is left to guess. My guess is it was released as bottle mail, uncanceled, before the storm, and when found, was entered into the postal system. Perhaps the recipient added the green “sunk” handstamp after receipt?

If not a refugee from the disaster, it is at least an interesting souvenir of the storm.