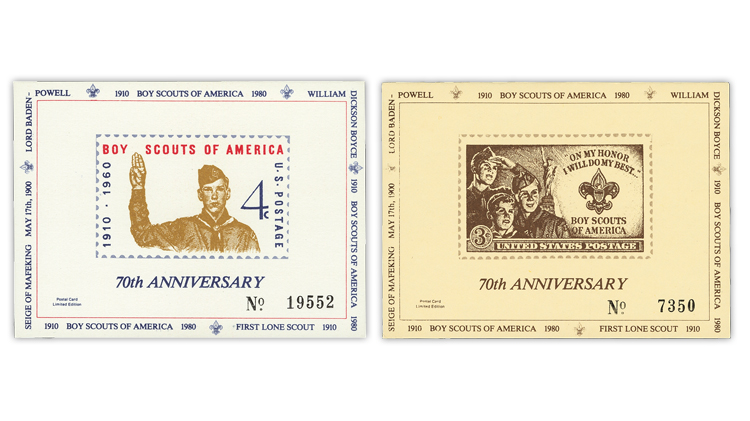 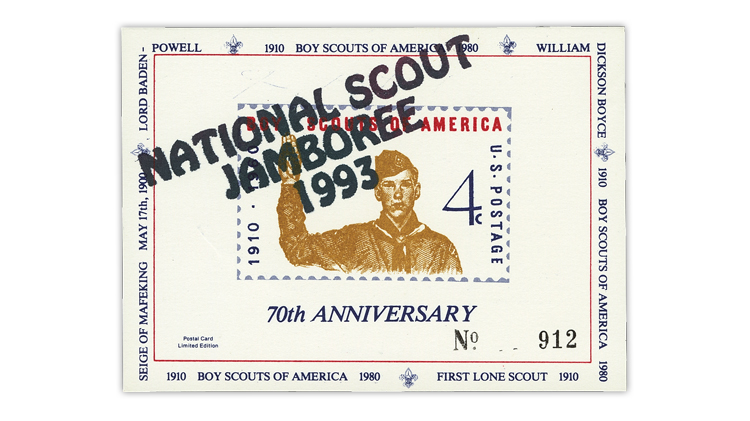 With thanks to Linn’s reader Frederick J. Oppliger of St. Petersburg, Fla., I want to put a bow on something I have written about in the past: Boy Scout souvenir cards that feature images of Boy Scout commemorative stamps.

Oppliger, who is a devoted member of the Scouts on Stamps Society International, helped me locate and obtain another card, shown here in Figure 2. We both believe that there are only these three types of cards.

The Boy Scouts of America prepared and sold the cards.

The two cards in Figure 1 celebrate the 70th anniversary of the organization in 1980. One card shows an image of the 3¢ stamp issued in 1950 for the Second National Jamboree at Valley Forge, Pa (Scott 995). The other depicts the 1960 4¢ stamp marking the 50th anniversary of the Boy Scouts of America (1145).

The card showing the 1960 stamp was overprinted in 1993 for the National Scout Jamboree held that year. Figure 2 pictures this overprinted card.

The scout depicted on the 4¢ stamp was based on a living model: Thornton Percival of Stockbridge, Mass. Norman Rockwell painted Percival as the image to be used on the stamp.

It is probable that the 3¢ stamp also was based on living models. That image of the three scouts was first used in a Boy Scouts of America advertising poster, but its origins seem to be lost in the mists of time. If any Linn’s reader knows anything of its creation, I would love to hear from you.

I am pleased to report that I was able to pick up a packet of 80 of the 3¢ cards offered on eBay and would like to share them with Linn’s readers.

If you would like one — and only one per reader — I will send an example to the first 80 readers who send a request, accompanied by a stamped, addressed envelope, to John Hotchner, Box 1125, Falls Church, VA 22041-0125.

What do you suppose this scout is thinking?