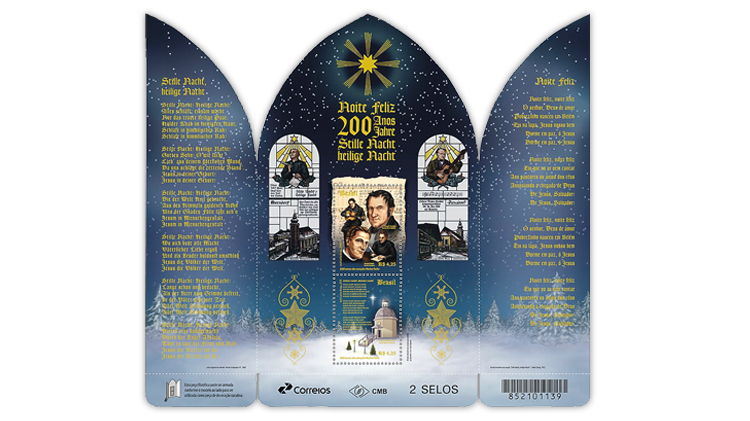 Brazil’s 2018 Christmas souvenir sheet marking the 200th anniversary of the carol "Silent Night" was one of the two winners of the St. Gabriel award for the best religious stamp of 2018. The souvenir sheet is a triptych, with panels that can be folded. 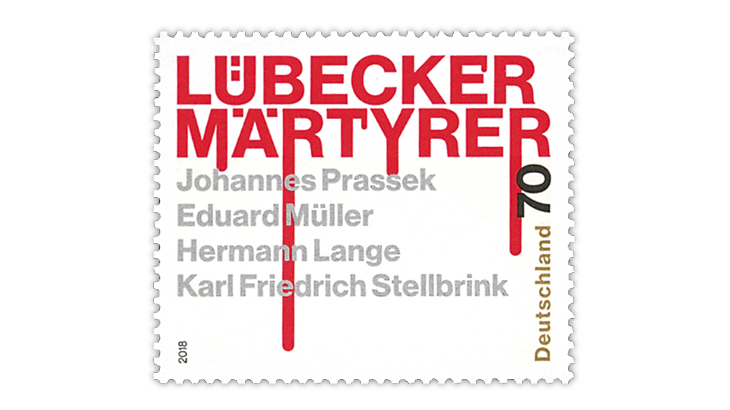 Also winning the St. Gabriel award was the German stamp marking the 75th anniversary of the execution of four clergymen known as the Lubeck martyrs. Their names — Johannes Prassek, Eduard Muller, Hermann Lange and Karl Friedrich Stellbrink — are inscribed
Previous
Next

Brazil and Germany shared the 2019 St. Gabriel award for the best religious stamp issued in 2018.

The winning design from Brazil was for its Christmas souvenir sheet commemorating the 200th anniversary of the carol Silent Night.

The German stamp remembers the four clergymen known as the Lubeck martyrs.

Designed by Jose Carlos Braga, the Brazilian souvenir sheet is arranged as a three-panel pocket oratory, or triptych, that can be folded.

The souvenir sheet includes two 4.25-real stamps, both of which are on the central panel of the triptych. The upper stamp shows Joseph Mohr writing the lyrics to Silent Night and Franz Gruber composing the music on guitar. The musical score of the carol is illustrated in the background.

The lyrics to Silent Night are inscribed in Portuguese and German on the lower stamp in the souvenir sheet. This stamp also features the chapel in Oberndorf, Austria, where Silent Night was first performed on Christmas Eve of 1818.

Brazil issued this souvenir sheet Dec. 6, 2018. Two self-adhesive stamps issued at the same time are shaped like eight-pointed stars and feature the same designs as the stamps on the souvenir sheet.

The Archdiocese of Hamburg’s website about the martyrs said: “On the 10th of November 1943 four clergymen, the Lutheran Pastor Karl Friedrich Stellbrink and the Catholic priests Hermann Lange, Eduard Muller and Johannes Prassek were executed in the Hamburg Prison Holstenglacis. They took a firm stand in public and among the parishioners entrusted to their care against the crimes of the Nazi regime. In witnessing with their lives and by dying they conquered the separating divide of denominations and became shining examples of real ecumenism. On the 25th of June 2011 the Catholic chaplains were beatified, the revering commemoration applies for all four.”

The stark, but dramatic, stamp design is dominated by the words “Lubecker Martyrer” (Lubeck martyrs) in red capital letters with blood dripping from some of the letters in “Martyrer.” The names of the four martyrs also are inscribed in silver on the stamp.

The awards were presented Oct. 6 at the Fioroni Foundation in Legnago, Italy. The Italian post office, Poste Italiane, produced a commemorative cancel for the event.