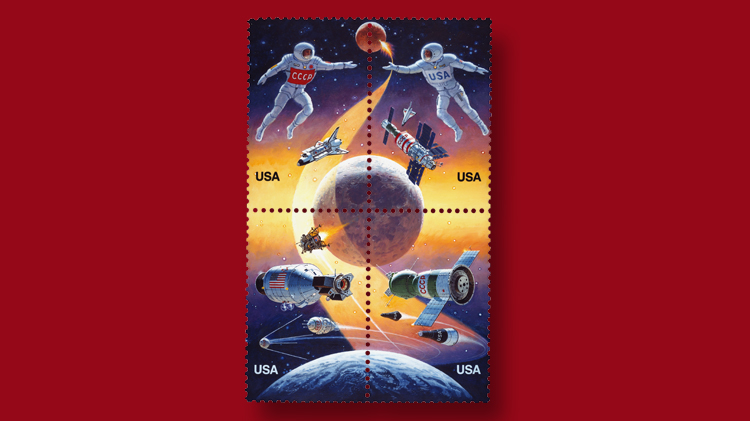 United States and Soviet postal authorities had agreed on this artwork for the Space Accomplishments joint issue. However, it had to be altered at the last minute to remove the CCCP and USA from the space suits as the Soviet Union had recently ceased to e 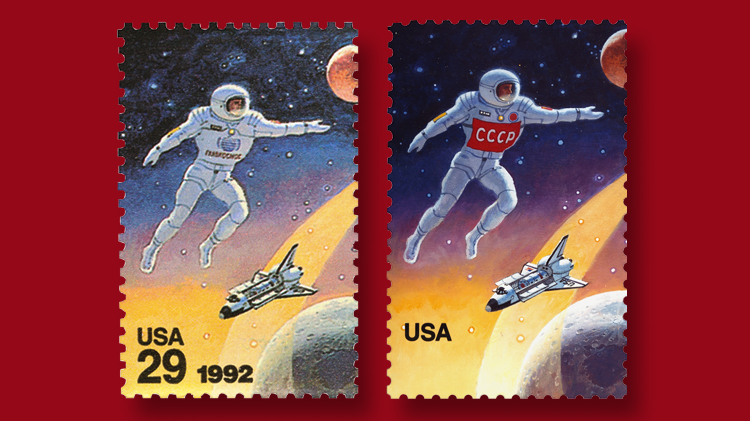 A closer look at the artwork for the stamp featuring the cosmonaut. Originally, the space suit included CCCP. On the issued stamp, this was replaced with the emblem of the space agency Glavkosmos. 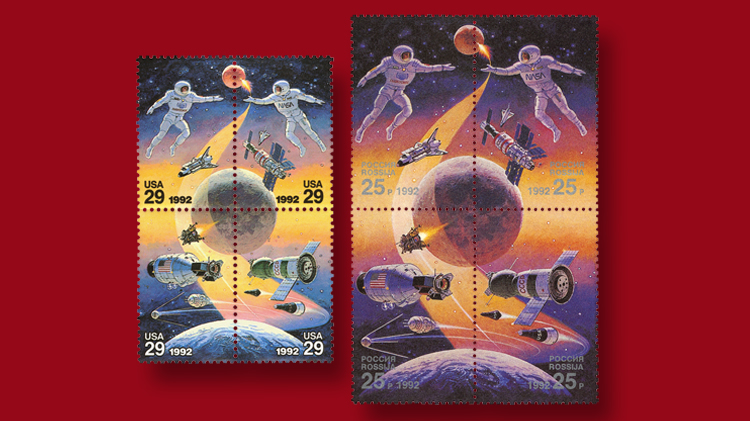 This 1992 joint issue between Russia and the United States celebrated cooperation and accomplishments in space. The designs of the stamps also were a joint project.
Previous
Next

One of the more striking United States space issues was the Space Accomplishments joint issue with Russia.

The fall of the Soviet Union in December 1991 affected these designs.

Planning for this joint issue began in 1990 when the Soviet Union was alive, if not well. The art was a joint project of American artist Robert McCall (1919-2010) and Soviet artist Vladimir Beilin. McCall previously had worked with other Soviet artists.

By late 1991, the two postal administrations had agreed on art for the stamp designs. But in December — at the 11th hour in terms of stamp production — the U.S. Postal Service received a phone call from the Russians saying that in view of the “radical changes taking place” in the Soviet Union, the letters CCCP (the Russian abbreviation for Union of Soviet Socialist Republics) would have to be removed from the uniform of the cosmonaut on the stamp in the upper left.

After discussion back and forth, both the CCCP on the cosmonaut and USA on the American astronaut (on the stamp in the upper right) were replaced.

The first idea was to replace these country designations with flags, but ultimately the cosmonaut and astronaut were identified with the logo of Glavkosmos (the Russian space agency) and NASA (the National Aeronautics and Space Administration), respectively.

My thanks to Harold Griffin, who provided the original approved art and correspondence on the subject from the personal files of Jack Williams, the USPS program manager for philatelic design at the time this joint issue was being developed.