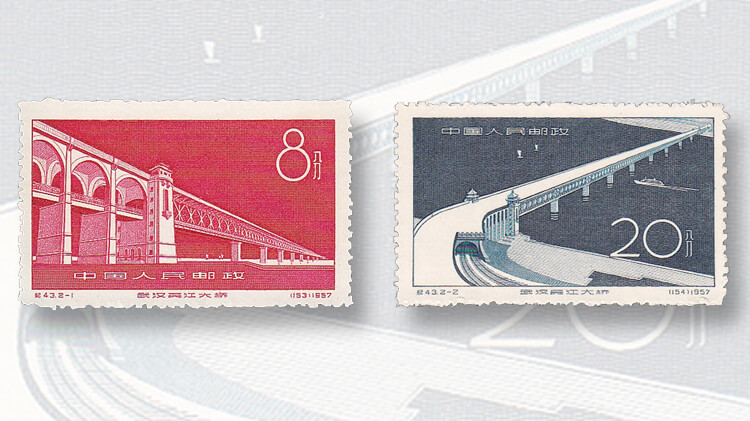 In 1957, China issued two stamps to celebrate the completion of the Yangtze River Bridge at Wuhan. 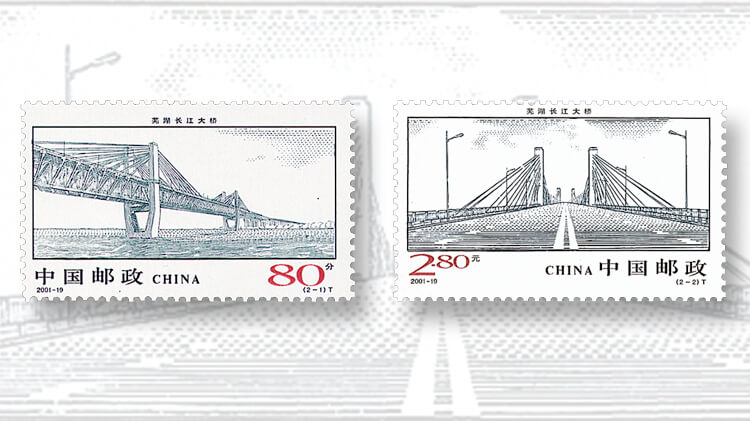 In 2001, China Post celebrated the completion of the Wuhu Yangtze Bridge the previous year with this two-stamp set. 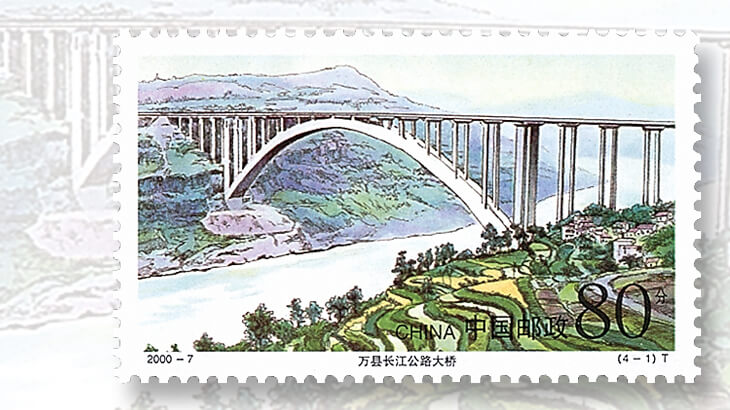 The Wanxian Bridge, which crosses the Yangtze in Chongqing, is featured on this stamp, one of a set of four issued in 2000. 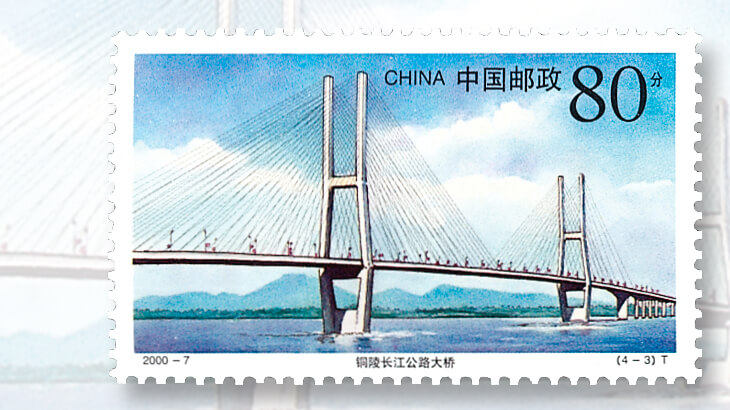 The third stamp in the Bridges set of 2000 illustrates the Tongling Bridge, completed in 1995. 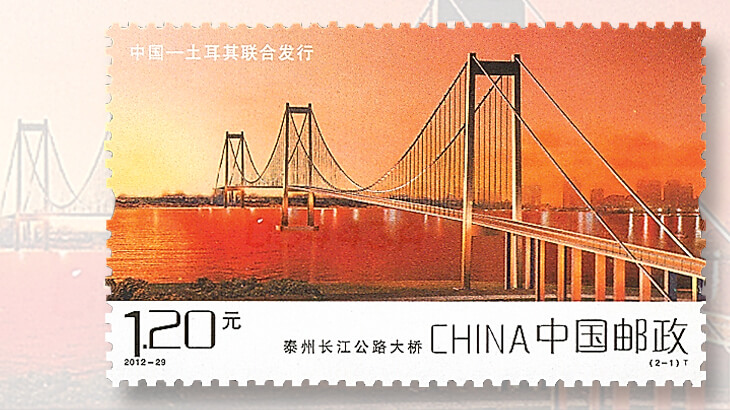 In 2012, a bridge complex was completed at Taizhou and was featured on a $1.20 stamp issued the same year. 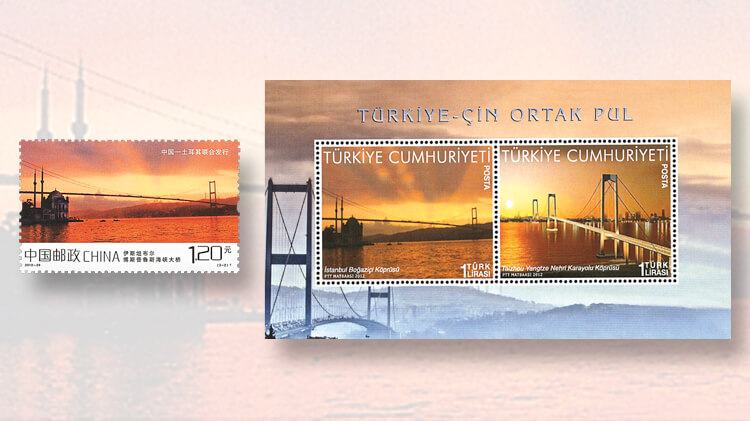 China and Turkey participated in a 2012 joint issue to celebrate the Taizhou and Bosporus bridges. China issued a single $1.20 stamp, left, and Turkey served up a souvenir sheet. 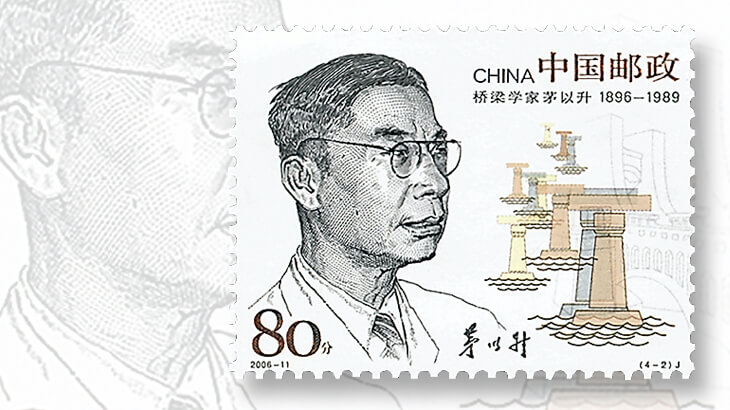 Called the father of modern bridge design, Mao Yishing is shown on this China stamp issued in 2006. 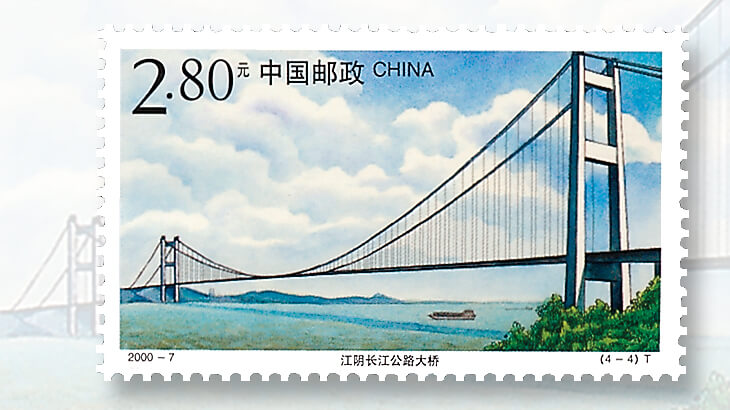 Jiangyin Bridge, the longest bridge of the four shown on the 2000 Bridges set, was completed in 1999. 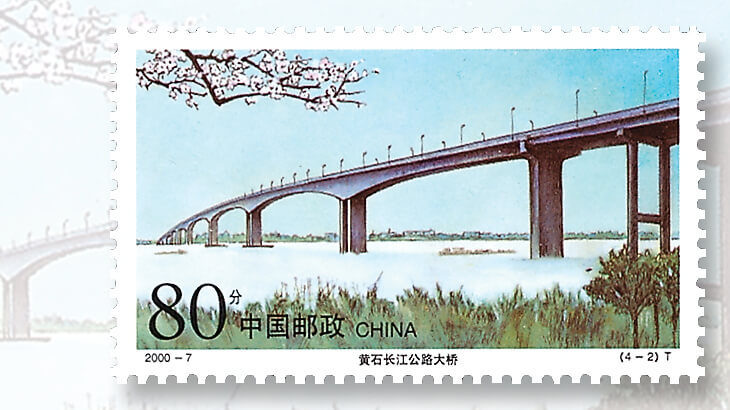 Located about 55 miles downriver from the bridge at Wuhan, the Huangshi Bridge is pictured on the second of the four 2000 Bridges stamps. 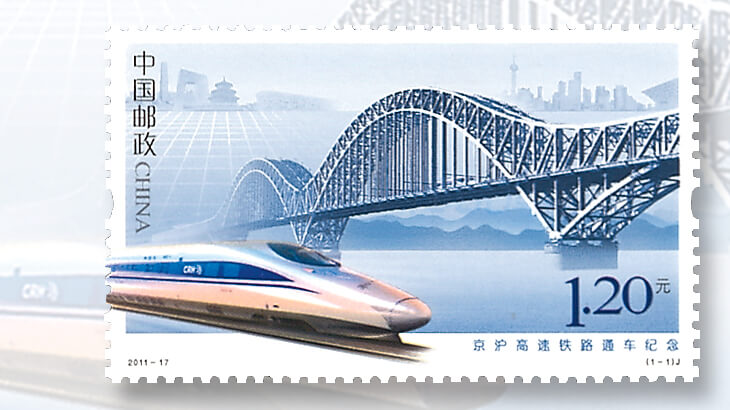 The Dashengguan Railroad Bridge in Nanjing (Nanking) was begun in 2006 and completed in 2011. This $1.20 stamp commemorating the bridge’s opening was issued the same year.
Previous
Next

Throughout most of China’s recorded history, a period extending back more than two millennia, the Yangtze River has acted as a virtual barrier to commerce and trade from the north.

Because of the problems presented by the volume of water, the width of the river channel, or poor quality of the subsoil, there were no permanent bridges spanning the Yangtze over its last 1,800 miles from Yibin, near the highlands of Sichuan (Szechuan) Province, all the way to Shanghai on the coast where it empties into the Pacific Ocean.

The simplified map below shows the locations of the Yangtze and other places and structures discussed in this article.

Goods and people crossing the river had to be ferried across. Well into the 20th century, a train of even moderate length could take an entire day to be disassembled, barged to the other side, and then reassembled.

Armies had to construct temporary pontoon bridges to move men and materiel across the river, a time- and resource-consuming task.

The first permanent span over the river along this stretch was completed in 1957 in Wuhan, the capital of Hubei Province, about 525 miles upriver from Shanghai.

Two stamps, denominated 8 fen and 20f, were issued in the year of the bridge’s completion to celebrate the event (Scott 319 and 320). Still currently in service, it is a bi-level truss bridge, slightly more than 1 mile in length.

A four-lane highway uses the top level; the bottom level carries the double-track mainline of the Beijing (Peking) to Guangzhou (Canton) railroad.

The Wuhan Yangtze River Bridge was a seminal event in Chinese civil engineering history. Not only was it the first permanent bridge over that long stretch of the river, but it also cemented the reputation of Mao Yisheng (1896-1989), a bridge engineer trained in the United States.

In the mid-1930s, he had designed a similar bridge spanning the Qiantang River in Hangzhou (Hangchow), but the Wuhan Bridge was more complex by several orders of magnitude.

Called by many the father of modern bridge design, Mao was honored with the stamp pictured below in 2006 (Scott 3501) as part of the ongoing Scientists of Modern China series. Despite the success of the Wuhan Bridge, during the next 35 years only six more bridges across the river were constructed. However, since 1992, because of massive investment in infrastructure by the central government, no fewer than 68 new Yangtze River bridges and six tunnels have been built.

The balance of this article highlights stamps issued since 1992 depicting highway and/or railway bridges across the Yangtze.

In 2000, a set of four stamps was issued featuring highway bridges across the river. Three of the four are located within about 300 miles from the mouth of the river in densely populated eastern China.

The first stamp of the set (Scott 3013) is the Wanxian Bridge in Chongqing (Chungking), which opened to traffic in 1997.

A reinforced concrete arch bridge approximately ½ mile in length, it is the only one of the four located far upriver, approximately 1,000 miles from Shanghai.

The second stamp in the set (Scott 3014) shows the Huangshi Bridge located about 55 miles downriver from that first bridge at Wuhan.

It is a box-girder bridge of prestressed concrete that took four years to build and opened in 1995. Including approaches, it is 1.6 miles in length and spans a river channel approximately half that distance.

The third stamp in the Bridges set of 2000 (Scott 3015) features the Tongling Bridge, also completed in 1995. It is a cable-stayed, reinforced concrete bridge with a length of 3,780 feet.

Located about 300 miles upriver from Shanghai, it carries a four-lane expressway that designers intended ultimately to connect the capital of Beijing with Taibei (Taipei), the capital of the Republic of China on Taiwan.

This highway will likely not be completed for a long while (if ever), not only for political reasons because it would require either reunification of Taiwan with the rest of China or a degree of inter-governmental cooperation that might never be achieved, but also for engineering reasons because it would need to traverse the 110 miles of the Taiwan Strait by bridge or tunnel, or a combination of the two.

The first three stamps in the set each have a denomination of 80f. The fourth 2000 Bridges stamp is a high-denomination $2.80 issue (Scott 3016). Featured in the image below, it pictures the Jiangyin Bridge, the longest bridge of the four and completed in 1999. This structure is a two-mile suspension bridge located only about 100 miles from the mouth of the Yangtze, the furthest downstream bridge until the Sutong Bridge, some 60 miles closer to the sea, was completed in 2008.

The Jiangyin Bridge carries the Beijing-to-Shanghai Expressway over the river. It is currently the 10th longest suspension bridge in the world and was the first long-span suspension bridge built in China. It was constructed in just under three years by the British firm Cleveland Bridge and Engineering.

In 2001, China Post celebrated the completion of the Wuhu Yangtze Bridge the previous year with a two-stamp set (Scott 3135 and 3136). It is located about 175 miles upriver from Shanghai.

The river channel is about ½ mile wide at this point, but the total project length is 6.5 miles. It is a cable-stayed, double-decker bridge whose upper tier carries a four-lane expressway and the lower level two sets of rail tracks.

The first 2001 Bridges stamp, an 80f issue, shows a perspective from water level. The other stamp is a $2.80 denomination that pictures the expressway’s center line on the top level of the bridge.

The Dashengguan Railroad Bridge in Nanjing (Nanking) was begun in 2006 and completed in 2011.

A $1.20 stamp commemorating the bridge’s opening was issued the same year (Scott 3929).

This double-arch bridge just more than 1 mile in length carries the Beijing-to-Shanghai High Speed Railway over the river. It is located about 175 miles from the sea.

The first car of a train-set intended for use on the line is pictured in the foreground.

Finally, in 2012 a bridge complex was completed at Taizhou and was featured on a $1.20 stamp issued the same year (Scott 4056). Located about 140 miles upriver from Shanghai, this highway bridge crosses the river in two segments.

The northern span is a suspension bridge 4.2 miles in length; the southern part is a box girder construction 1.8 miles in length. The transition between the two bridges is on a large island in the river.

Including approaches, this project was 38.5 miles long. It has won multiple international awards for engineering excellence.

This stamp was part of a joint issue with Turkey, which issued a souvenir sheet of two stamps picturing the Taizhou and Bosporus bridges (Scott 3319).

This article has focused on stamps featuring Yangtze River bridges. In keeping with the bridge theme, next time I will discuss the oldest bridge still in use in China and the Great Hangzhou Bay Cross-Ocean Bridge, completed in 2007, a structure that had to overcome some of the greatest tidal bore forces on the planet.