Great Britain’s Two-Penny Blue stamp is printed next to a label showing the medal by William Wyon on which the design of this stamp and the Penny Black were based.

Royal Mail’s new stamp-on-stamp design of the Penny Black will be offered in a booklet of six. The booklet also includes the London 2015 Europhilex stamp show emblem. 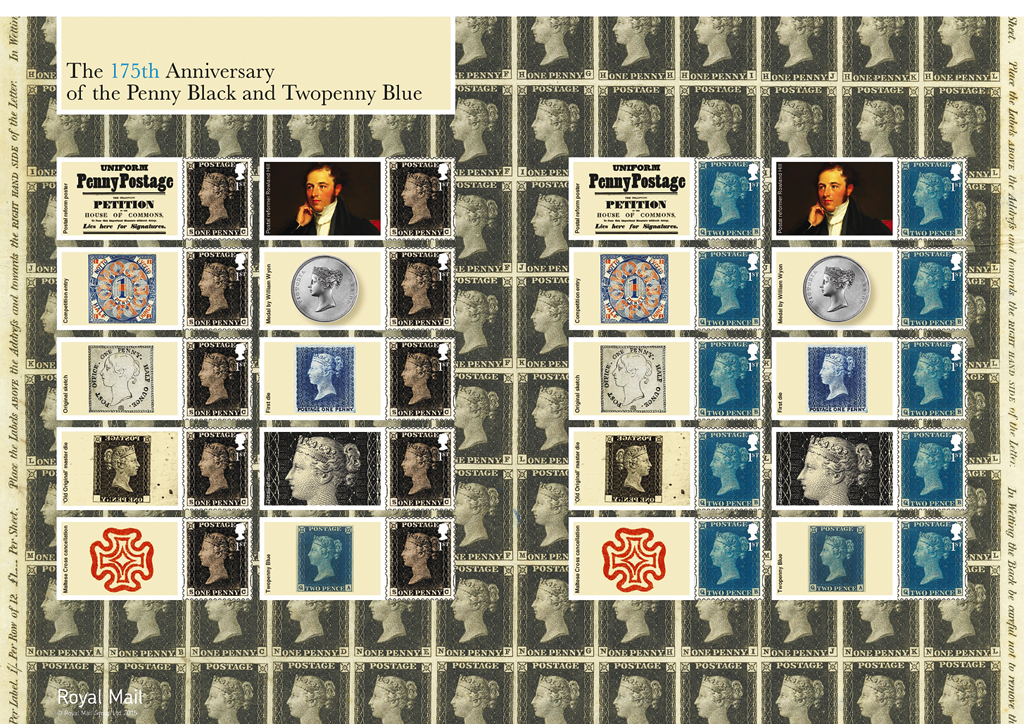 Labels in this pane of 20 stamps from Great Britain’s Royal Mail illustrate milestones in the development of the world’s first postage stamps.

Great Britain’s Royal Mail is celebrating the 175th anniversary of the world’s first postage stamp, the 1840 Penny Black, and the second stamp, the Two-Penny Blue, with these stamp-on-stamp designs to be issued May 6.

The world’s first adhesive postage stamp was issued May 6, 1840, as part of sweeping postal reforms in Great Britain. This 1-penny black stamp showing Queen Victoria became known as the Penny Black. The second stamp, which went on sale to the public just two days later, is called the Two-Penny Blue.

To celebrate the 175th anniversary of the Penny Black, Royal Mail will issue a souvenir sheet, a stamp booklet, and two panes of stamps and se-tenant labels on the May 6 anniversary date.

The London 2015 Europhilex stamp show, also commemorating the anniversary, will take place May 13-16 at the Business Design Centre, Islington, in London.

The new stamps feature stamp-on-stamp designs of both the Penny Black and the Two-Penny Blue, with the addition of the silhouette of Queen Elizabeth II in white at upper right with “1st” below it.

The souvenir sheet containing two examples of each stamp is illustrated with the Great Britain Philately column on page 20.

The two stamps also appear together in a pane of 20 stamps (10 of each design) and se-tenant labels.

An illustration of a sheet of Penny Black stamps is featured in the selvage.

The items shown on the labels illustrate different milestones in the development of Britain’s postage stamps, and were selected in consultation with Douglas Muir, senior curator of philately at the British Postal Museum and Archive. Godfrey Design designed this pane.

One label shows a portrait of postal reformer Rowland Hill, who is considered to be the inventor of the postage stamp; while another reproduces a section of a poster campaigning for postal reform. Also illustrated is the medal by William Wyon on which the designs of the Penny Black and Two-Penny Blue were based. Other labels picture sketches and dies for the stamps.

The red Maltese Cross cancellation used on the stamps also is pictured on a label.

Another pane of 20 includes the Penny Black stamp-on-stamp design and blank labels that can be personalized as part of Royal Mail’s Smilers service. Royal Mail also is offering a half sheet of 10 Smilers stamps.

Six examples of the Penny Black stamp-on-stamp design are contained in a booklet, along with the logo of the London 2015 Europhilex stamp show and a paragraph with a quote from postal reformer Hill.

The paragraph reads: “‘A bit of paper just large enough to bear the stamp and covered at the back with a glutinous wash’ — this was Rowland Hill’s proposal that eventually became the world’s first adhesive postage stamp. Issued in 1840, the Penny Black made it easy and inexpensive to send mail, revolutionising communications forever.”

Sedley Place designed the souvenir sheet, and International Security Printers printed it by lithography. The sheet measures 144 millimeters by 74mm, and the stamps are 20mm by 24mm, perforated gauge 15 by 14.

Among the other Royal Mail products for the 175th anniversary of the Penny Black issue are first-day covers, three postcards reproducing the designs of the two new stamps and the souvenir sheet, and a presentation pack including illustrations from the British Postal Museum and Archive and text by Muir about the 1840 postal reform and details about the printing of the first stamps.