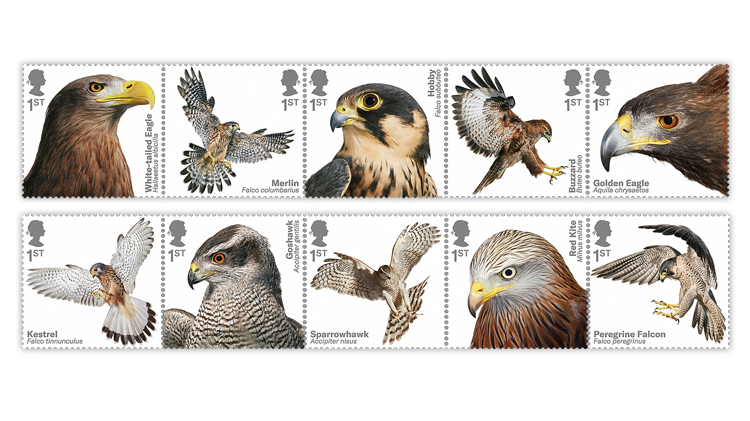 Birds of prey that range in size from the merlin to the white-tailed eagle are pictured on 10 nondenominated first-class commemorative stamps issued April 4 by Great Britain’s Royal Mail. The stamps, which are in two se-tenant strips of five, feature phot

The designs of these 10 non-denominated first-class stamps (the rate is currently 70 pence) are based on photographs by British animal photographer Tim Flach. All the photographs were taken at the International Centre for Birds of Prey, and show the birds close-up or in flight.

The stamps are in two se-tenant strips of five with the different designs side by side. The first strip shows the white-tailed eagle (Haliaeetus albicilla), merlin (Falco columbarius), hobby (Falco subbuteo), buzzard (Buteo buteo), and golden eagle (Aquila chrysaetos).

With a wingspan that can exceed 90 inches, the white-tailed eagle is the United Kingdom’s largest bird of prey. This sea eagle previously was pictured on a stamp in Royal Mail’s 2007 Endangered Birds issue (Scott 2498).

At the other end of the size spectrum, the merlin is the United Kingdom’s smallest raptor, generally between 9.4 inches and 11.8 inches in length with a wingspan of 20.9 inches to 26.8 inches.

The merlin is a falcon, as is the hobby. The latter bird, which often dines on dragonflies, migrates each spring from Africa to the United Kingdom, returning to Africa in the early fall.

Once rare in the United Kingdom, the buzzard is now common. Due to increased protection and decreased pesticide use, the population grew more than 450 percent from 1970 to 2015, according to the charity Woodland Trust.

The golden eagle is named for the feathers on its head and neck. In the United Kingdom, this large eagle is mostly found in Scotland. It also inhabits regions of North America, Europe, Asia and northern Africa.

The kestrel also is shown in flight on five stamps issued in 2003 (Scott 2092-2096). The favorite prey of the kestrel is the vole, although it also eats other small mammals, small birds, insects and earthworms.

Royal Mail describes the goshawk as an “aggressive, forest-dwelling hunter” that can twist and turn through the trees. The adults are gray and white, while the juveniles are brown. In addition to the United Kingdom, the goshawk is found in the United States and other parts of the world.

The small sparrowhawk is generally found in gardens catching other birds.

The red kite and peregrine falcon were shown on different stamps in the 2007 Endangered Birds issue (Scott 2500 and 2507, respectively).

The red kite faced extinction in the United Kingdom in the early 20th century, with only a few remaining in Wales. Royal Mail reports that now there are 900 pairs in Wales, and that pairs of kites can also be seen soaring together in other parts of the United Kingdom.

Considered the fastest living creature on earth, peregrine falcons can reach diving speeds well over 200 mph. In addition to the United Kingdom, this falcon is found around the world in every continent except Antarctica.

Royal Mail Group Ltd. designed the commemorative stamps, based on original designs by the agency GBH.

The stamps are 37 millimeters by 35mm each, perforated gauge 14.5. International Security Printers printed them by lithography in sheets of 50, sold in panes of 25 at most outlets. The sheet stamps have traditional stamp gum.

Two of the stamps, the Buzzard and the Hobby, are available as self-adhesives in a booklet. The booklet also includes four first-class red Queen Elizabeth definitive stamps. The booklet stamps were printed by gravure.

Other products offered are first-day covers; 10 postcards reproducing the designs of the stamps; and a presentation pack with all 10 stamps and text about the birds by Jemima Parry-Jones, the director of International Centre for Birds of Prey.