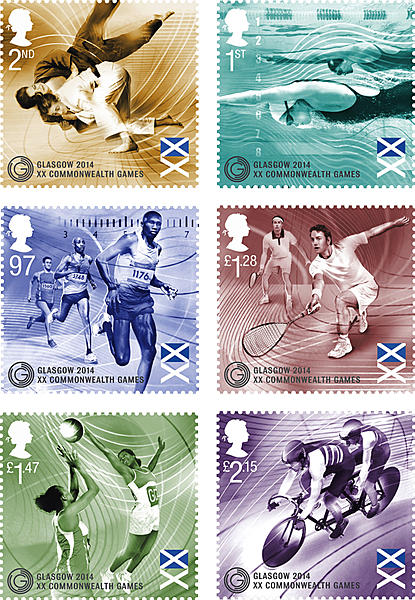 Approximately 4,500 athletes in 71 national teams competed in 17 sports during the games, which opened July 23 in Glasgow, Scotland, and closed Aug. 3.

Royal Mail reports that the designs are based on photographs of professional athletes demonstrating the sports, but added that their “faces were changed to keep the emphasis on the action rather than the protagonist.”

Two nondenominated stamps are included among the other five: a second-class stamp featuring judo and a first-class stamp depicting swimmers. The current second- and first-class rates are 53 pence and 62p, respectively.

Squash is featured on the £1.28 denomination for worldwide airmail up to 20 grams.

The £2.15 high value of the set pays the worldwide airmail rate up to 60 grams. The design shows para-sport track cycling. This competition for cyclists with disabilities made its Commonwealth Games debut at Glasgow.

Sports photographer Andy Hooper took the photographs for the stamps, and Nanette Hooglsag created the illustrations. Howard Brown was the designer.

International Security Printer printed the stamps by offset in sheets of 50 (sold in panes of 25 at most postal outlets), and the booklet by gravure.

Other products offered in conjunction with the Glasgow Commonwealth Games issue include first-day covers, six postcards reproducing the designs of the stamps, and a presentation pack including the stamps, illustrations by Tim Maars and text by Jim Davies.