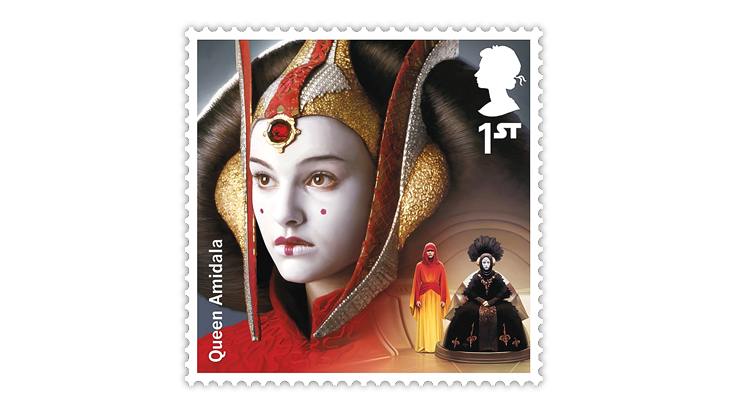 Great Britain’s Royal Mail will issue its third set of stamps highlighting Star Wars films on Nov. 26. Queen Amidala (portrayed by actress Natalie Portman) is among the characters featured on the upcoming stamps. 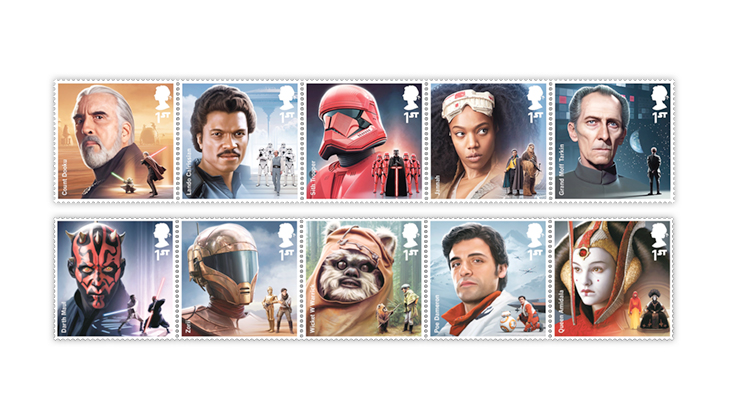 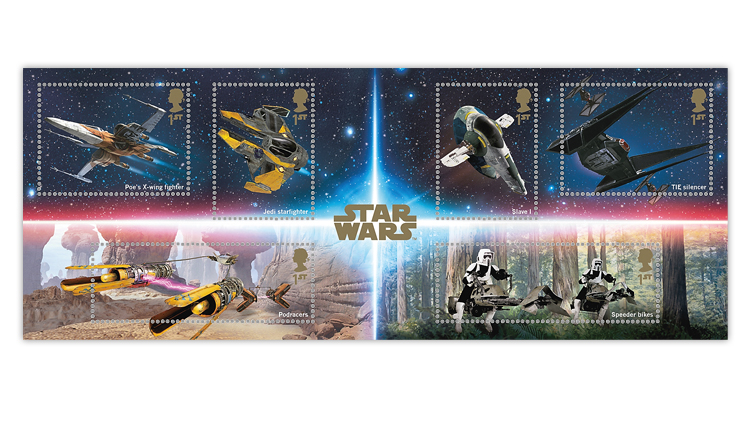 Great Britain’s Nov. 26 Star Wars set will include a souvenir sheet with six stamps depicting iconic vehicles from the films.
Previous
Next

Great Britain’s Royal Mail has completed its own Star Wars trilogy Nov. 26 with a new set of 16 stamps featuring characters and vehicles from the films.

Royal Mail reports that the new stamps mark the release of the film Star Wars: The Rise of Skywalker, which is scheduled to debut in Great Britain on Dec. 19 and in the United States on Dec. 20.

Star Wars characters, some from the upcoming film and others from previous films, are depicted on 10 nondenominated first-class stamps printed se-tenant (side-by-side) in two strips of five.

Each stamp includes a highlighted character and a secondary character or scene from illustrations by British artist Malcolm Tween. He also created the illustrations for the two previous stamp sets in the series.

Philip Parker of Royal Mail said: “Once again Malcolm Tween takes us on a journey across the Star Wars galaxy with extraordinary artwork of characters old and new. The stamps are miniature masterpieces and a fitting tribute to mark the end of the Skywalker saga.”

The first strip of five begins with a stamp featuring Count Dooku, the Jedi master who joined the dark side to become a Sith villain. He was portrayed by Christopher Lee (1922-2015).

The scene in the lower right of the stamp depicts Count Dooku engaging in a lightsaber battle with Jedi master Yoda.

Pictured next is Lando Calrissian (portrayed by Billy Dee Williams), a character described on the Star Wars website as a former captain of the Millennium Falcon who evolved from a “smooth-talking smuggler to galactic hero.” His aid, Lobot, is shown with Stormtroopers in the lower right.

Calrissian, who first appeared in The Empire Strikes Back (1980), returns in the upcoming Star Wars: The Rise of Skywalker.

The next two stamps also feature characters from the upcoming film with a red-armored Sith trooper on the middle stamp in the strip and Jannah (Naomi Ackie) on the fourth stamp.

The secondary image on the middle stamp depicts additional Sith troopers with their ruthless leader Kylo Ren. Pictured with Jannah on the other stamp are Lando Calrissian and Chewbacca. Royal Mail says that she joins these legendary heroes “in the fight against the evils of the First Order.”

Illustrated twice on the last stamp in this strip is Grand Moff Tarkin, the commander of the Galactic Empire’s Death Star. The grand moff was portrayed by Peter Cushing (1913-94), who was honored on a nondenominated first-class stamp in the 2013 Great Britons set. On that stamp (Scott 3159), Cushing is shown playing Sherlock Holmes.

The second strip begins with two illustrations of Darth Maul (Ray Park, voiced by Peter Serafinowicz), a Sith lord and a Zabrak from the planet Dathomir. In the smaller image, he is fighting a young Obi-Wan Kenobi.

The character Zorii Bliss (Keri Russell), described by Royal Mail as a streetwise scoundrel and a “tough spice runner from the snowy planet Kijimi” will debut in the upcoming film. She is shown on the second stamp of this strip along with a scene of C-3PO and Resistance pilot Poe Dameron.

Featured on the fourth stamp is the aforementioned Poe Dameron (Oscar Isaac) with his trusty droid BB-8.

The final stamp in the strip shows Queen Amidala of the planet Naboo (Natalie Portman) and a Naboo handmaiden.

The current first-class rate is 70 pence. This is represented on the nondenominated stamps in the set with a “1st” inscription that replicates the iconic font used for the films, according to Royal Mail.

The agency Interabang designed the stamps, and International Security Printers printed them by lithography.

The se-tenant strips of five stamps were printed in sheets of 50 (sold as panes of 25 in most postal outlets). These stamps are square, measuring 35 millimeters by 35mm, perforated gauge 14.5 and have PVA gum.

The 16 stamps from the new issue are presented on four panes in the prestige booklet. A fifth stamp pane includes a block of eight Queen Elizabeth II definitive stamps — four 2p, two 5p and two £1.17 — and a central label.

Among the related products offered by Royal Mail are FDCs, a set of 16 postcards reproducing the designs of the stamps, and a presentation pack with the 10 stamps and the souvenir sheet. Also, a special pane of 30 combines the 10 characters stamps from this issue with stamps from the 2015 and 2017 issues.

The stamps, souvenir sheet, booklets and other related products are available online from Royal Mail.