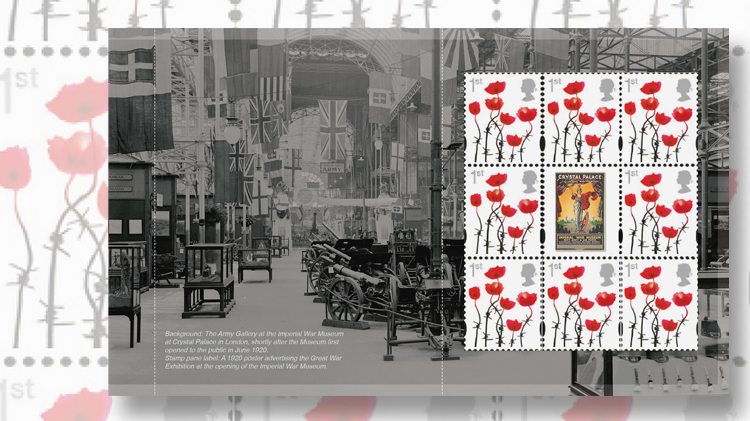 One of the four stamp panes in the prestige booklet contains a block of eight definive-sized stamps showing poppies on barbed wire. 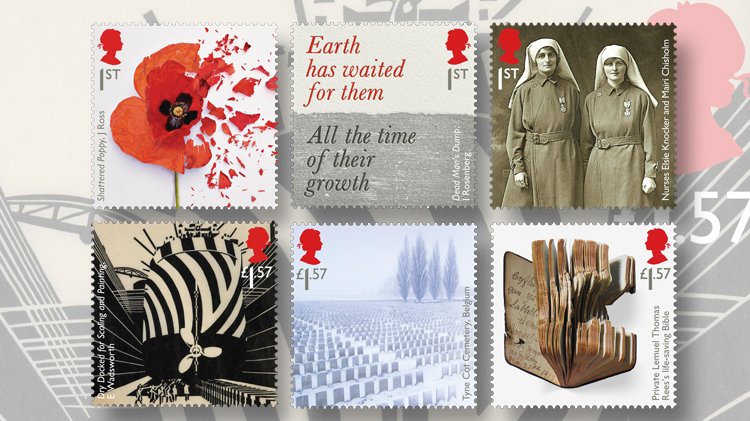 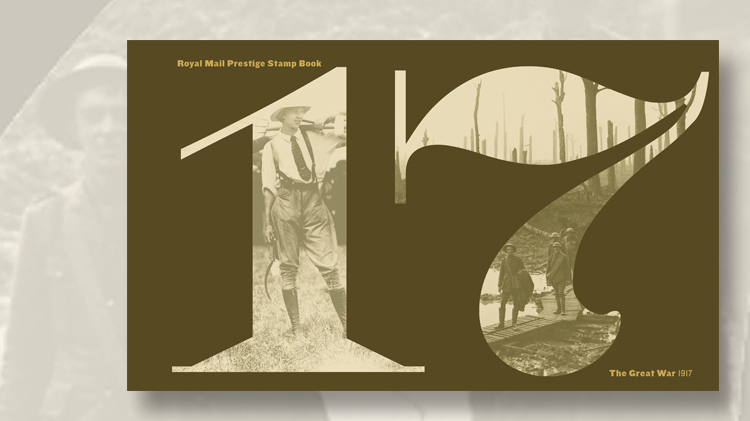 The cover of the prestige booklet for Great Britain’s latest set of stamps in its World War I series. The stamps, text, and illustrations in the booklet tell the story of the war in 1917.
Previous
Next

In addition to the six stamps, the new set includes a prestige booklet titled “The Great War 1917,” with related text and illustrations.

As in the previous sets, the first three stamps in the new set are nondenominated, paying the first-class rate (currently 65p).

These stamps feature Shattered Poppy by John Ross, poetry by Isaac Rosenberg, and a photograph of WWI nurses Elsie Knocker and Mairi Chisholm.

The other three stamps are denominated £1.57 to pay the rate for letters to Europe weighing more than 100 grams.

The designs of the £1.57 depict artwork by Edward Wadsworth, Tyne Cot Cemetery in Belgium, and a Bible that saved the life of a young private.

Royal Mail explained the process John Ross used for the poppies artwork shown on the stamp: “To create Shattered Poppy, photographer, John Ross, needed a supply of fresh poppies and so he set up a temporary studio in a barn next to a poppy field, where he froze freshly cut poppies using a vat of liquid nitrogen, before breaking the brittle petals with a metal rod. Backlit to maximise the flower’s colour and fine structure, the resulting image suggests a sudden, devastating act of violence, an impression that is heightened by the poppy’s natural delicacy.”

A painter and poet, Isaac Rosenberg was killed at age of 27 in World War I. His name, along with those of 15 other poets, is inscribed on a memorial to WWI poets in Westminster Abbey’s Poets’ Corner.

The abbey’s website, gives this brief description: “Isaac Rosenberg (1890-1918) was killed in action. The publication in 1937 of his Collected Works confirmed his importance as a writer of realistic war.”

The stamp features the following lines from Rosenberg’s poem Dead Man’s Dump: “Earth has waited for them/All the time of their growth.”

Nicknamed the “Madonnas of Pervyse,” Elsie Knocker and Mairi Chisholm served as ambulance drivers and nurses on the front line at Pervyse, Belgium, during the war, receiving several medals for their bravery and substantial press attention at the time.

Diane Atkinson retold their story in Else & Mairi Go to War, published in 2010 by Pegasus. In announcing the book, the publisher said: “When they met at a motorcycle club in 1912, Elsie Knocker was a thirty year-old motorcycling divorcee dressed in bottle-green Dunhill leathers, and Mairi Chisholm was a brilliant eighteen-year old mechanic, living at home borrowing tools from her brother. Little did they know, theirs was to become one of the most extraordinary stories of World War I.

“In 1914, they roared off to London ‘to do their bit,’ and within a month they were in the thick of things in Belgium driving ambulances to distant military hospitals. Frustrated by the number of men dying of shock in the back of their vehicles, they set up their own first-aid post on the front line in the village of Pervyse, near Ypres, risking their lives working under sniper fire and heavy bombardment for months at a time.”

Before the war, English artist Edward Wadsworth (1889-1949) was part of the short-lived vorticism art movement that blended cubism and futurism.

Vorticism influenced the “dazzle camouflage” designs that Wadsworth and others created for ships during the war. Rather than hide the Allied ships, this type of camouflage used geometric patterns and bold designs to cause confusion.

The stamp shows an example of dazzle camouflage from Wadsworth’s 1918 woodcut Dry Docked For Scaling and Painting.

Tyne Cot near the village of Passchendaele in Belgium is the largest Commonwealth War Graves Commission cemetery in the world, with 11,961 buried or commemorated there. Of those buried there, more than 8,000 are unidentified. Their gravestones are marked “Known unto God.”

The cemetery also includes a war memorial inscribed with the names of 35,000 United Kingdom and New Zealand servicemen killed in the Ypres Salient after April 16, 1917, whose graves are not known.

A ceremony was held at the cemetery July 31 to mark the 100th anniversary of the first day of the Battle of Passchendaele. Also called the Third Battle of Ypres, it was one of the bloodiest battles of the war.

Private Lemuel Thomas Ree of the South Wales Borderers, 6th Battalion, was seriously wounded by shrapnel from a German shell in the battle, but his life was saved by the small Bible in his breast pocket.

After convalescing, Ree returned to battle. He died Nov. 13, 1918 (two days after the armistice treaty) due to bronchial pneumonia and the effects of gas attacks.

The firm Hat-trick Design designed the stamps using images from a variety of sources, including a photograph by Mike Sheil for the Tyne Cot Cemetery stamp and a photograph by John Ross for the Life-Saving Bible stamp. The typography on the Isaac Rosenberg stamp is by Kelvyn Laurence Smith.

International Security Printers printed the stamps. They are square, 35 millimeters by 35mm, and are perforated gauge 14.5 by 14.5.

Another prestige booklet pane has a se-tenant block of four stamps featuring stamps with poppy designs from the souvenir sheets in the 2006-08 Lest We Forget/Remembrance Day series (Scott 2614a in the upper left, 2530a in the upper right and lower left, and 2614a in the lower right).

The final pane contains a block of eight of the definitive-sized stamp showing poppies on barbed wire from 2012 (Scott 3118A). This design originally appeared in the 2006 Lest We Forget souvenir sheet.

A label in the center of the pane shows a 1920 poster advertising the Great War Exhibition at the opening of the Imperial War Museum.

Royal Mail’s other products for this WWI set include first-day covers, six postcards reproducing the designs of the stamps, and a presentation pack with mint examples of the stamps and information about the war in 1917.