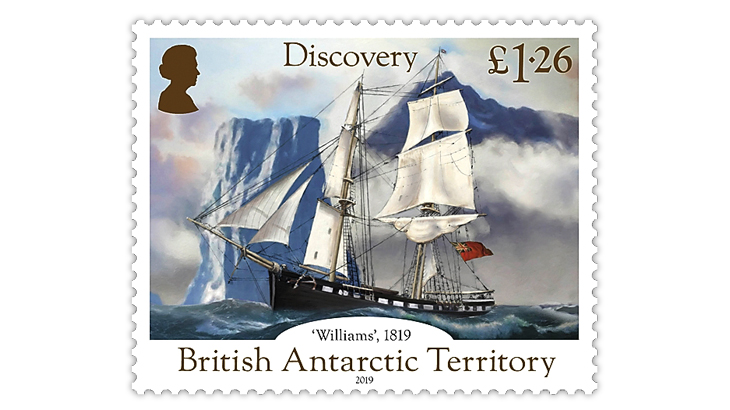 This recent stamp from the British Antarctic Territory commemorates the 200th anniversary of the discovery of the Antarctic continent.

The government of the British Antarctic Territory is sponsoring a stamp design contest for children in conjunction with the 200th anniversary of the discovery of the Antarctic continent.

The theme of the competition is “Discovering Antarctica.”

According to information on the website of the government of the British Antarctic Territory, there will be four winning designs, one from each of the following age categories: 4 to 6 years, 7 to 9, 10 to 13 and 14 to 17.

Each of these four winning designs will be shown on an upcoming postage stamp.

The entries must be submitted on the official entry form and sent by mail with a consent form completed by a parent or guardian. Links to the forms and to the competition’s terms and conditions can be found on the British Antarctic Territory website.

According to the terms and conditions, all entries must be received by May 12 and mailed to British Antarctic Territory, W2.80, Overseas Territories Directorate, Foreign and Commonwealth Office, King Charles Street, London SW1A 2AH, United Kingdom.

The terms and conditions also say, “Entries from outside the UK can be accepted, but they must arrive by post before the closing date.”

The British Antarctic Territory, the largest and most southerly of the United Kingdom’s 14 overseas territories, was established March 3, 1962, and its first stamps were issued Feb. 1, 1963.

Most of its stamps reflect Antarctic themes, while a few celebrate events related to the British monarchy.

A recent set of stamps, issued Nov. 18, 2019, commemorates the 200th anniversary of the discovery of Antarctica.

The three £1.26 stamps in that set are inscribed “Discovery,” “Exploration” and “Protection,” respectively. The Discovery stamp shows the ship Williams.

The new-issue announcement said: “19 February 1819 marked the first sighting of land south of 60º latitude. The British Master Mariner, William Smith, sighted what is known today as the South Shetland Islands. He was on board his ship Williams which is depicted in the first of this three-part stamp set. … After having been ridiculed for his discovery by non-believers, Smith reached the Islands again and on 16 October 1819 made the first recorded landing on Antarctic territory.”

The British Antarctic Territory has no permanent population, but it does have workers at its three research stations and two logistical facilities. According to the government website, there are approximately 250 workers during the austral summer (November to March) and 30 during the winter. The territory has four post offices that operate during the summer.