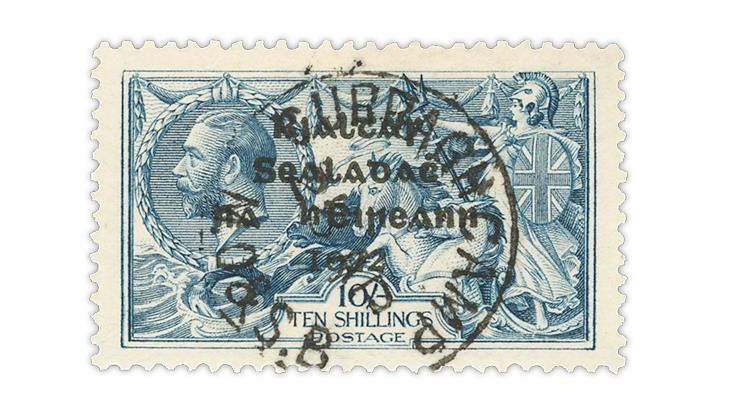 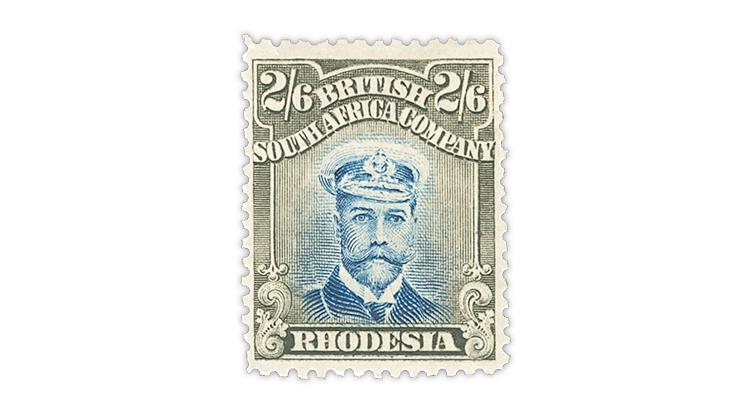 This Rhodesia 2-shilling, 6-pence pale blue and brown King George V stamp, a scarce color variety, will be up for bids during the Nov. 19 Colonial sale.
Previous
Next

Leading off the sale are 90 lots of Great Britain, including British offices in Morocco.

Colonial notes that the British Africa offerings include “many scarce to rare items.” There is a nice selection of Cape of Good Hope triangles, along with a strong showing of Gold Coast and Kenya.

Colonial describes the stamp as “superb” and is offering it with an estimate of $490 (£375 in the Stanley Gibbons catalog).

Among the noteworthy stamps from Rhodesia is a scarce color variety not listed in the Scott catalog: the 2-shilling, 6-pence pale blue and brown King George V in the 1913-22 regular issue. Colonial describes the unused lightly hinged stamp as a variety of the 2sh6d gray and blue King George V (Scott 133a) and calls it “a great rarity.”

Three dies were used to print some of the King George V stamps (Scott 122, 124-138). The 2sh6d pale blue and brown stamp in the Colonial sale was printed with die II, which shows a faint and broken outline at the top of the king’s cap. The left ear is not outlined and is shaded all over.

The 2sh6d pale blue and brown King George V stamp, which is listed in the Stanley Gibbons catalog as No. 236a, comes with a Royal Philatelic Society London certificate and is offered with an estimate of $7,280.

All 1,413 lots in the Nov. 19 auction are available for viewing on the Colonial Stamp Co. website, and bids may be placed online using the firm’s bid sheet.