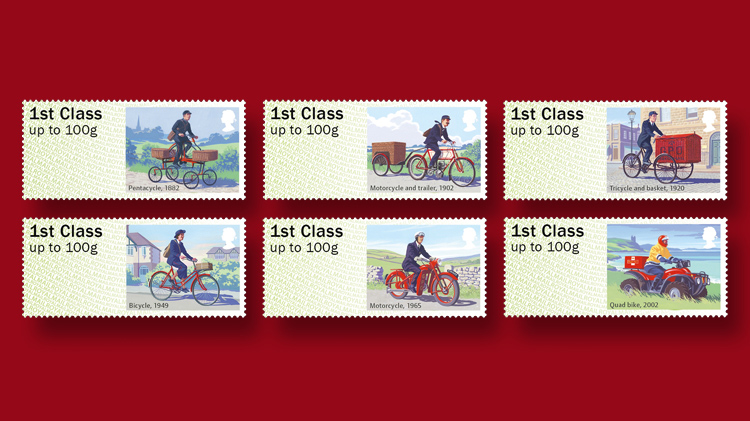 The fifth set of postal labels in Great Britain’s Royal Mail series with a mail transportation theme illustrates the history of mail delivery by bike, showing examples from 1882 to 2002.

Mail carried by bike is the theme of the latest set of self-adhesive postage labels from Great Britain’s Royal Mail.

Covering 120 years in the history of using bikes to deliver mail in the United Kingdom, the labels show postal workers pedaling or riding motorized bikes with rural, village and city scenes in the background.

The earliest bike shown on one of the new post & go labels has five wheels. According to Royal Mail, this pentacycle was used to deliver in 1882 in the Horsham district of Sussex.

Royal Mail said: “Postmen liked these machines, but officials were unconvinced of their practicality, and so their use never extended beyond the initial trials.”

The use of tricycles to deliver mail predates that of the pentacycle by at least two years. However, the tricycle shown on one of the labels is from 1920.

Royal Mail said: “First introduced in 1880, tricycles, with their large wicker baskets, had been ideal for carrying substantial amounts of mail in urban and rural districts. By the First World War, they were antiquated and insufficient for the increasing weight of the mail.”

The bicycle, a mainstay of Britain’s postal fleet for more than 100 years, is represented by a 1949 scene.

Three labels feature motorized vehicles, starting with a 1902 motorcycle and trailer used to deliver letters and parcels in rural districts around Sittingbourne, Kent. Royal Mail said, “This was very much a local initiative, and it was among the first motorized deliveries outside London.”

Jumping ahead more than 60 years, another label shows a postal worker riding a 1965 motorcycle in the countryside.

The last label in the set pictures a postal worker on a quad bike in 2002.

Royal Mail reported these four-wheeled vehicles “were ideal for the rough terrain of the Scottish islands Gigha, Iona and Kerrera, allowing Royal Mail to reach locations previously accessible only by foot.”

Royal Mail is offering a first-day cover franked with all six Mail by Bike labels. The labels also are packaged with a carrier card that includes additional information about the history of carrying mail by bikes.