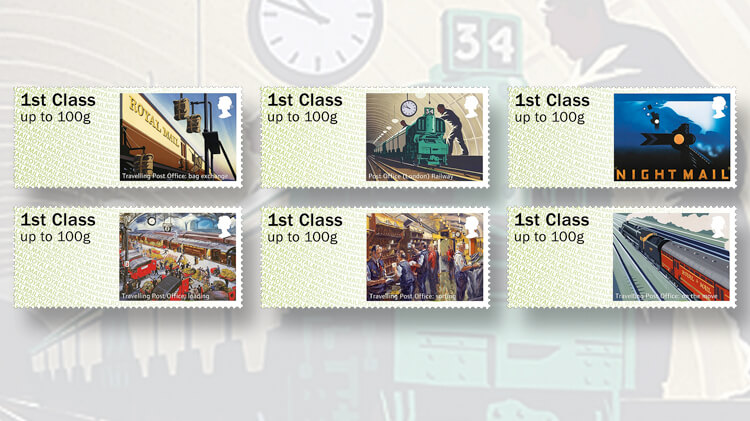 Royal Mail calls such labels “post & go.” The service inscriptions are printed at the time of purchase. The six new labels continue the Royal Mail Heritage series that was introduced in 2016.

In previewing this set, the December 2016 issue of the British Philatelic Bulletin said: “Mail by Rail celebrates the important role that the UK’s railway system has played in moving the nation’s post for almost 200 years. This six-stamp Post & Go set features paintings and posters telling the story of mail trains from the first service on the Liverpool & Manchester Railway on 11 November 1830 to the night of 9 January 2004 when the last Travelling Post Offices rail service ran.”

One new label is inscribed “Travelling Post Office: bag exchange.” This apparatus, which allowed for the exchange of mailbags without the train having to stop at a station, was first successfully used in 1838, according to Royal Mail.

The second label represents London’s underground post office railway, which operated from 1927 to 2003. The Mail by Rail labels coincide with the 90th anniversary.

A section of this railway is scheduled to reopen later this year as an attraction of London’s new Postal Museum. The museum’s website, http://postalmuseum.org, described the original system as “a subterranean network of automated trains stretching from Paddington to Whitechapel,” adding that “millions of items of mail [were] delivered every day, round the clock, deep beneath the streets of London.”

The third label reproduces a 1939 Night Mail poster by Pat Keely, who was known for both his World War II and post office posters.

According to Royal Mail, Keely’s poster promoting the documentary film Night Mail was his most famous commission.

A 1948 painting by Grace Golden showing the loading of mail at London’s Euston Station is pictured on the fourth label. This painting also was featured on a poster.

Sorting mail aboard a traveling post office is depicted on the fourth label. Ian Cryer painted the scene shown on the stamp in 2003.

The final label pictures a traveling post office on the move.

International Security Printers produced them by gravure. Each label measures 56 millimeters by 25mm.

The postage labels are available from terminals in post office branches throughout the United Kingdom. The terminals allow customers to weigh their letters and packages, pay the postage, and print the appropriate label.

Royal Mail also is offering a first-day cover franked with all six of the Royal Mail Heritage: Mail by Rail post & go labels.