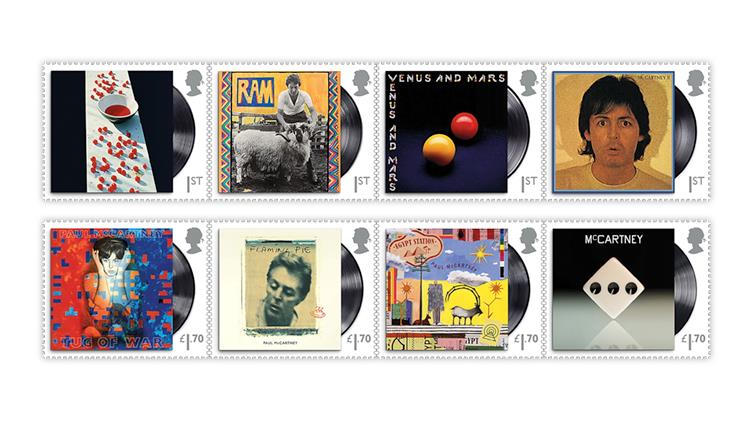 Great Britain’s Royal Mail will issue 12 stamps May 28 celebrating Paul McCartney as one of the United Kingdom’s greatest music icons and most successful songwriters. Seven stamps show covers of his solo albums, starting with his first solo album, McCartn 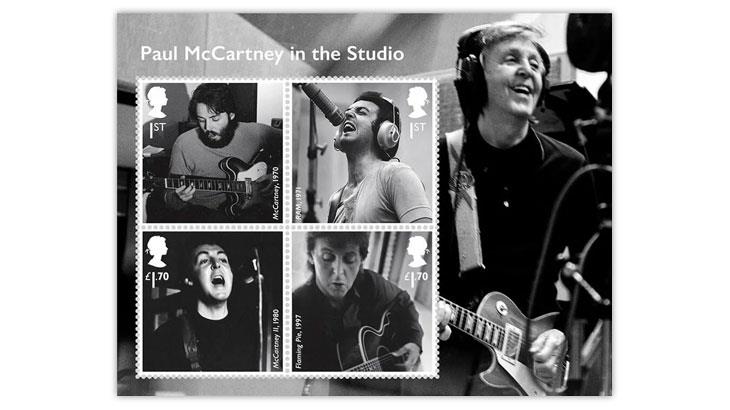 Great Britain’s May 28 philatelic tribute to Paul McCartney will include a souvenir sheet of four stamps showing black-and-white photographs of him in the recording studio.
Previous
Next

Royal Mail revealed the designs of its 12 stamps honoring Paul McCartney as a music icon on May 6, a little more than three weeks ahead of the May 28 issue date.

Royal Mail also reported that it collaborated with McCartney and his team at MPL Communications Ltd. for this stamp issue, adding that McCartney was personally involved “in the images used and the wider product range created for the issue.”

The new Paul McCartney set includes eight stamps featuring covers of his albums as a solo artist and with his band Wings, and a souvenir sheet of four stamps showing black-and-white photographs of McCartney in the recording studio.

The cover of Ram, the only album credited to both McCartney and his first wife, Linda (1941-98), is shown on a nondenominated first-class stamp.

Another first-class stamp depicts the cover of Venus and Mars, Wing’s fourth studio album. Released in 1975, the album reached No. 1 in the United Kingdom and the United States.

The cover of McCartney III, released in December 2020, is featured on one of the four £1.70 stamps.

The souvenir sheet, which is titled “McCartney in the Studio,” includes two first-class stamps and two £1.70 stamps.

In announcing the Paul McCartney set of 12 stamps, David Gold of Royal Mail said: “Paul McCartney remains a vital figure at the centre of rock and pop — an artist whose legacy is immense, but whose work continues to generate popular attention and critical acclaim. This dedicated stamp issue is a fitting tribute to one of the UK’s much loved and revered musical icons.”

The stamps and a range of collectible products are available for pre-order beginning May 6 from www.royalmail.com/paulmccartney.