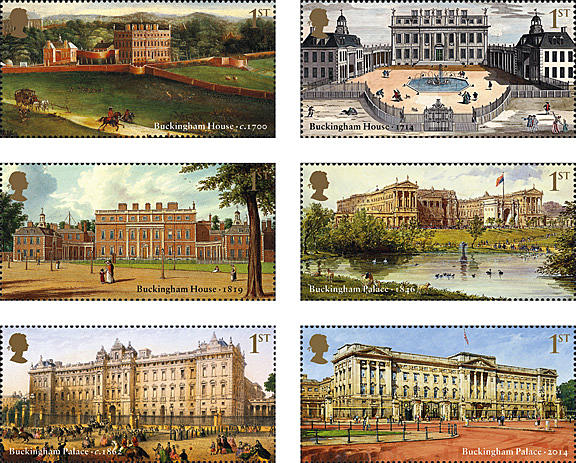 Great Britain pictures its royal residence in London, Buckingham Palace, on six stamps to be issued April 15. The stamps show paintings and other images of the house and palace dating from the early 18th century to 2014. 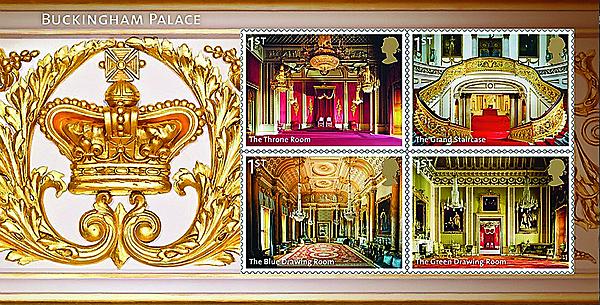 Four of Buckingham Palace’s most opulent rooms are featured on the souvenir sheet.

A prestige booklet will include text and illustrations of the palace, the official London residence of Britain’s kings and queens since 1837 and the monarch’s administrative headquarters.

Six stamps show the exterior as it has appeared from 1700 to the present.

The other four stamps, which are se-tenant (side-by-side) in a souvenir sheet, show photographs of four of the palace’s 775 rooms.

All of the stamps are nondenominated, paying the first-class rate, currently 62 pence.

Howard Brown designed the stamps that reproduce paintings or other images of the exterior.

Three of the stamps are inscribed “Buckingham House.”

In the early 18th century, poet and politician John Sheffield, the first duke of Buckingham and Normanby, demolished an existing house on the site and built Buckingham House.

The earliest work of art shown on the stamps is a watercolor, circa 1700, attributed to Adriaen van Diest. In addition to the house, the painting shows a deer park, dogs, horses and a coach.

Another stamp reproduces a 1714 color engraving by an unknown draftsman, showing the residence as viewed from St. James’s Park. People strolling, a fountain, and dogs can be seen.

The third stamp pictures an 1819 watercolor by William Westall.

King George III had purchased Buckingham House in 1761 for his wife Queen Charlotte to use as a family home close to St. James’s Palace.

In the 1820s, architect John Nash transformed the house into a palace for King George IV, but Queen Victoria, in 1837, was the first monarch to use it as an official residence.

An 1846 watercolor by Joseph Nash is reproduced on the first of three stamps inscribed “Buckingham Palace.” This painting shows the east front of the palace from St. James’s Park, with crowds outside; a fountain, swans and geese in the lake; and sheep on the grassy shore.

Next in chronological order is a color lithograph, circa 1862, by Achille-Louis Martinet.

A new painting of Buckingham Palace as it appears today is featured on the sixth stamp. Royal Mail commissioned Chris Draper to produce this watercolor.

Robert Maude and Sarah Davies designed the souvenir sheet and the four stamps it includes.

Derry Moore took the photographs of the throne room, grand staircase and the green drawing room that are shown on three of the stamps. The other stamp shows a photograph of the blue drawing room by Andrew Holt.

The official website of the British monarchy calls the staircase a magnificent example of architect Nash’s skillful design.

The website also says: “The transition from the comparative darkness of the Grand Hall to the bright daylight of the Grand Staircase imparts a sense of excitement and expectation so that the visitor reaches the top in a suitable frame of mind.”

Queen Victoria added the portraits of her family that are displayed around the upper part of the stairs.

Royal family portraits also can be seen on the stamps featuring the blue and green drawing rooms.

Guests gather in the blue drawing room for drinks before large luncheon parties and grand state and diplomatic occasions.

This room originally was decorated in red and known as the south drawing room. Queen Mary had the flock blue wallpaper hung in the room in the early 20th century.

The green drawing room leads into the throne room, and this room can be seen in the background on this stamp, as well as on the stamp inscribed “The Throne Room.”

The chairs with the monograms of Queen Elizabeth II and Prince Philip also are visible on both stamps.

The throne room was designed for investitures and ceremonial receptions of dignitaries. Today, it is used principally for the reception of formal addresses on important occasions, according to the British monarchy website.

The other pane contains eight Queen Elizabeth II Machin definitives: two 10p, four 20p and two £1, with a label in the center.

International Security Printers printed the six stamps showing the palace exterior. Each stamp measures 60 millimeters by 30mm and is perforated gauge 14.5. The stamps are in sheets of 36, but most postal outlets sell them in panes of 18.

Joh. Enschede of the Netherlands printed the souvenir sheet and the prestige booklet.

Walsall Security Printers printed the booklet of six by gravure.

Other products to be offered in conjunction with the Buckingham Palace stamps include first-day covers; a set of 11 postcards reproducing the designs of the stamps and the souvenir sheet; and a presentation pack including the stamps, souvenir sheet and text by architectural historian John Martin Robinson.