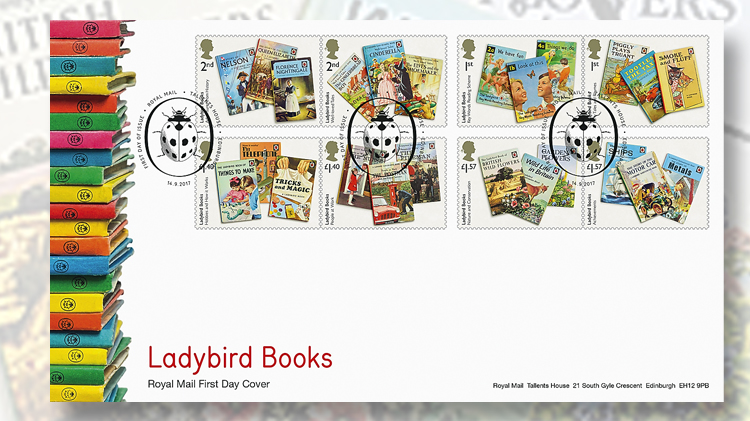 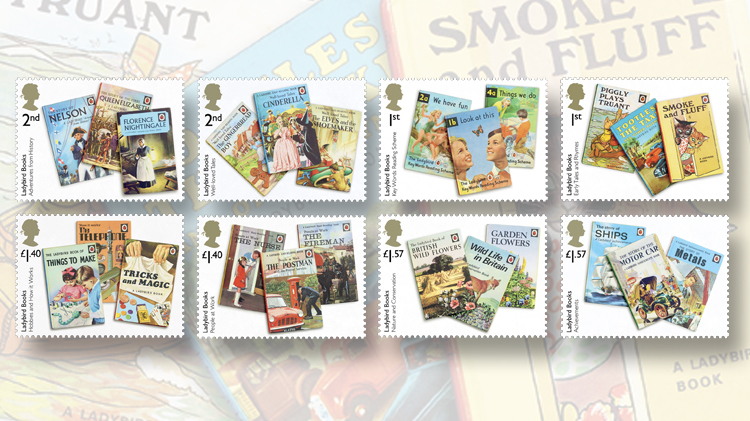 Numerous topics are represented on Great Britain’s latest set of stamps featuring the covers of books for children published by Ladybird Books.

Ladybird Books celebrated its 100th anniversary in 2015. A website launched in conjunction with the centennial, provides a brief history: “In 1915 the Ladybird trade mark was registered by Loughborough printer Wills & Hepworth. During the First World War the company, based in Loughborough, Leicestershire, began to experiment with publishing ‘pure and healthy’ literature for children. This was the founding of Ladybird Books.

“To this day, Ladybird Books are known and loved the world over. For millions of people, they bring back the golden days of childhood — learning to read, discovering the magic of books, and growing up.”

True North, a design and advertising agency, designed the stamps, using illustrations from the archives of Ladybird Books Ltd. Each design includes three book covers based on series from Ladybird Books.

For example, one of the two nondenominated, second-class stamps features the Adventures from History series. The design depicts the covers of biographies of Lord Nelson, Queen Elizabeth I, and Florence Nightingale.

In addition to these famous people, the book covers include ship flags, Elizabethan ships, a horse, and a war hospital scene. Of course, each book cover also includes the ladybird emblem of Ladybird Books.

The other stamp in the second-class se-tenant pair features the following books from the Well-loved Tales series: The Gingerbread Boy, Cinderella, and The Elves and the Shoemaker. For collectors of transportation themes, this stamp also shows Cinderella’s coach before it has been turned back into a pumpkin.

Three books in the Key Words Reading Scheme series are pictured on the first of the two nondenominated first-class stamps. Introduced in 1964, it is Ladybird Books’ longest-running and bestselling series. It is often called the Peter and Jane series, after the two main characters.

In the stamp design, Peter and Jane can be seen swimming on the cover of We have fun (book 2a), watching a butterfly on Look at this (1b), and painting a go-cart on Things we do (4a).

Illustrated on the other first-class stamp are Piggly Plays Truant, Tootles the Taxi, and Smoke and Fluff from the Early Tales and Rhymes series. Smoke and Fluff are the names of two mischievous kittens.

The first stamp in the £1.40 pair pictures Things to Make, The Telephone, and Tricks and Magic from the Hobbies and How it Works series:.

The illustration on the Things to Make cover shows a girl and boy using spools, paint, scissors, and string to make a caterpillar. The cover of Tricks and Magic includes coins, a box of matches, and playing cards.

On a £1.57 stamp, the Nature and Conservation series is represented by two books about flowers, British Wild Flowers and Garden Flowers, and one about fauna, Wild Life in Britain. The cover of Wild Life in Britain pictures a red fox on a stone wall.

The stamps measure 41 millimeters by 30mm and are perforated gauge 14.5 by 14. International Security Printers produced them by offset in sheets of 60 (sold in panes of 30 at most postal outlets).