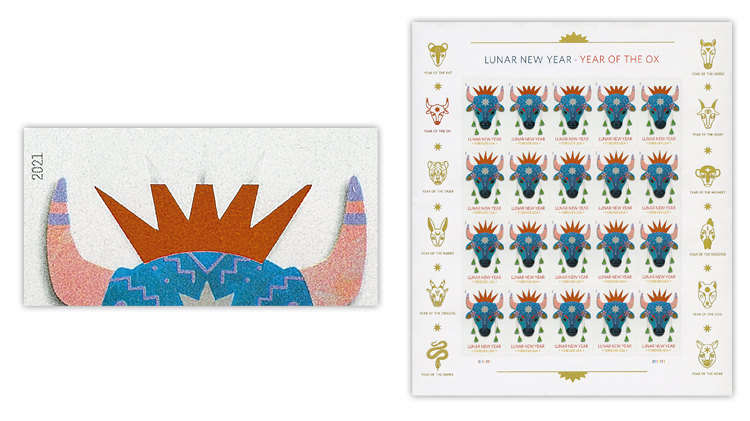 On this pane of 20 of the United States 2021 Year of the Ox commemorative forever stamps, the top five stamps are missing the crown tips of the red foil. While not considered an error, it is a production freak that might be of interest to specialists.

The United States Postal Service has used foil elements to enhance the designs of a few recent commemorative stamp issues.

Collectors haven’t reported any errors with the foil completely missing on these stamps. However with such an intricate process involved in creating this type of detail, one would expect some mistakes.

And although it is not an error, an unusual variety has surfaced on the Year of the Ox stamp issued Feb. 2 in a pane of 20. Michael Takacs, Mystic Stamp Company processing supervisor, reported the variety to Linn’s in March.

“The orange foil crowns on the top rows of Lunar New Year sheets are cut short. We’ve found this, to varying degrees, on about 80 percent of the sheets we’ve purchased,” he said. (The USPS describes this foil as red.)

A pane that was sent to Linn’s is shown nearby. On the five stamps in the top row, the tips of the red-foil crown are missing. The bottom two-thirds of the crown is still there. An impression of the crown tips remains because of the pressure used to apply the foil left an indentation.

While this variety won’t be listed in the Scott catalog because it isn’t an error, it is something specialists might want to keep an eye out for. If any of the Year of the Ox stamps are found to be completely missing the foil, that would be considered a listable error in the Scott catalog.