The stamp hobby legend found on a ‘Hindenburg’ cinderella cover 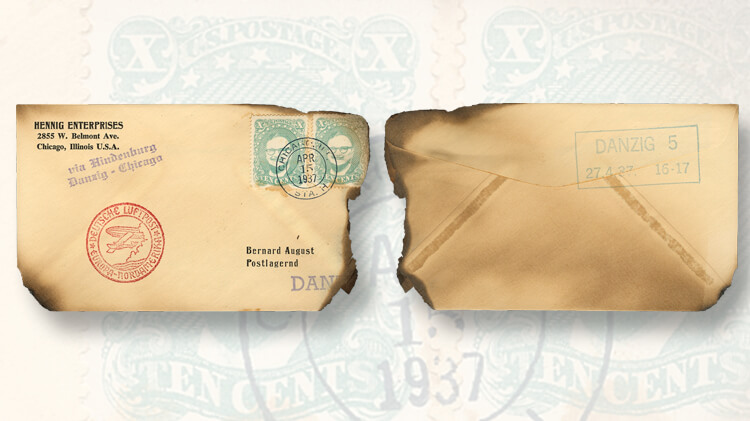 Simulating a Hindenburg crash cover, this cinderella cover honors Bernard A. “Bud” Hennig Jr., a philatelic marvel who was a mainstay of Chicago philately and the Germany Philatelic Society for many years.

In the early 1980s, I had an exhibit that had received a strings of vermeils (the second highest level of exhibiting award, just below gold), when a jury that Hennig chaired gave it a silver.

Ordinarily, when this happens to an exhibitor, he rants and raves about unfairness, and the stupidity of the judges. Some exhibitors even quit the pursuit in disgust.

I recall mumbling under my breath some of these reactions, but asked Bud — a philatelic institution in the United States with a well-deserved international reputation as a consummate philatelist — to tell me why I had been downgraded.

He obliged, spending half an hour dissecting my exhibit on the history of stamp separation, and telling me in detail where it fell short.

Equally important, he introduced me to the concept that exhibits should be evaluated against the standard of “Is it the best it can be?”

After a couple of months licking my wounds, I got to work. It took me two more years to get there, but the gold medal came. A few years later, the exhibit won a national-level grand award at a very strong Westpex show.

The point is that Bud pursued excellence in everything he did, demanded it of others as well, and mentored many people in their pursuits.

Unlike the persona of some at his exalted level, Bud was kind, approachable, the possessor of a gentle sense of humor, and a sympathetic guide. He also was a much sought-after expert and resource in his collecting areas of German airmail, German East Africa, Vatican City, and Guatemalan airmail.

In recognition of his exceptional abilities as a philatelic judge, the American Association of Philatelic Exhibitors created the Bernard A. Hennig award for excellence in judging in 2007, and named him as the first recipient.

Shown above is an odd-looking stamp I had spotted at last year’s Ameristamp Expo in Atlanta. I immediately wanted to add it to my collection.

The stamp pictures a young Hennig in a frame modeled on the 1855-59 10¢ issues. It is “canceled” April 15, 1937, just before the May 6 Hindenburg disaster of that year. The singed margins of the cover are meant to simulate damage that affected much of the mail that survived the crash and the fire.

My friend Rich Drews, one of the few subsequent Hennig award winners, told me that he believes the cover was created by Austin Dulin and Jim Czyl as a souvenir for a Germany Philatelic Society gathering in Chicago.

How many of these covers were created is not known. But whether unique or one of a thousand, it now has an honored place in my collection.

For those who would like to know more about Bud Hennig, please go to the American Philatelic Society’s web page for its hall of fame and click on the tab for the years “2015-2019” or  “alphabetical” and search for his name. Bud was inducted posthumously in 2015.

Thanks go to all of you who write in with corrections, reports, comments, and ideas for items on U.S. philately you’d like to see covered in this space.

A weekly column allows considerable latitude, but I could fill twice the space and still have material left over. In balancing the content to appeal to the widest possible range of readers, I must apologize that I can’t quote all correspondents or cover every issue that comes up.

If you write, please include a stamped addressed envelope if you wish a reply. The mailing address is John Hotchner, Box 1125, Falls Church, VA 22041-0125, or send an email.