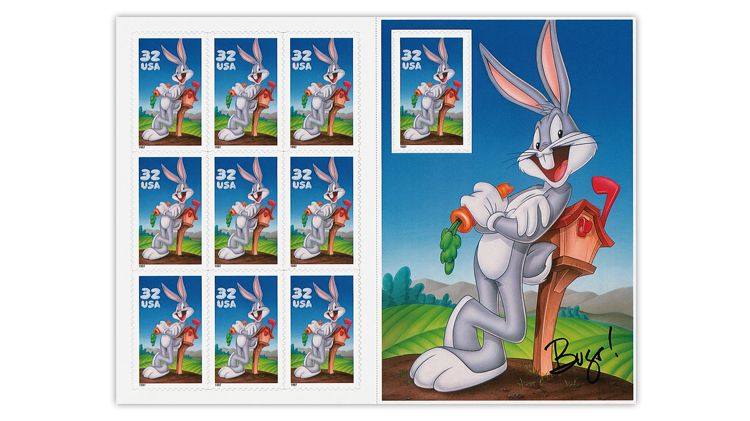 The United States set of 10 Bugs Bunny stamps will be issued July 27. The animated Warner Bros character previously appeared on a U.S. 32¢ stamp in 1997.

The United States set of 10 Bugs Bunny stamps will be issued July 27, but as of July 1 the designs had not been revealed.

The Postal Service did publish a description of the 10 images, however.

“On the first row of stamps Bugs appears as a barber with white smock and pointy scissors; achieves ‘airness’ on the brink of a slam-dunk in his basketball jersey; is debonair in beret, ascot, smoking jacket, and shades as a screen idol in his Hollywood digs; jokes it up as a jester in bright green garb and fool’s cap; and does a diva turn as an operatic Brunhilde in blonde braids and winged helmet.

“On the second row of stamps, Bugs is a mermaid in a curly 1940s up-do; is classically composed in white tie and tails at the piano; heroically poses as the carrot-powered Super-Rabbit with blue suit and red cape; warms up to pitch a big-league ballgame; and helps save the planet as a World War II U.S. Army staff sergeant in combat uniform with an American-flag backdrop.”

Early details of the forthcoming nondenominated (55¢) forever stamps were published on page 1 of the July 13 Linn’s Stamp News.

The stamps are being issued in a pane of 20 to commemorate the 80th anniversary of Bugs Bunny's official screen debut, according to the Postal Service.

The animated Warner Bros character previously appeared on a U.S. 32¢ stamp in 1997.