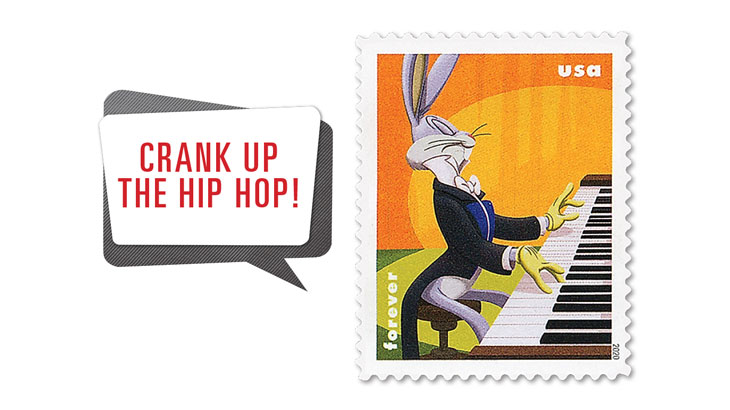 The winner of the nonphilatelic part of the September cartoon caption contest featuring the new forever stamp showing Bugs Bunny at the piano is Dale Stout of Colorado Springs, Colo., who mixed music and bunny motions to concoct an appropriate line. The n

Unexpectedly, to me at least, the most popular theme for the September cartoon contest featuring the new forever stamp showing Bugs Bunny at the piano (Scott 5500) was the recently appointed postmaster general.

Two representatives of this group are presented here.

From Mary Lou Moseley of Owensboro, Ky., comes “Victor Borge, Bugs Bunny, and PMG Louis DeJoy — each one can hit a sour note at times!”

And from Joe Timko of Vicksburg, Mich., we have “Now, everyone’s favorite, ‘Ode DeJoy’!”

This was the earliest of several similar entries referencing Beethoven’s Symphony No. 9 in D minor, often referred to as the Ninth Symphony.

The continuing COVID-19 pandemic inspired several entries. One of the best is “What’s up Doc Fauci? When can I play Happy Days Are Here Again?” submitted by Clyde Holt of Raleigh, N.C.

Jack Leonard of Hatboro, Pa., referred to the face value of the earlier stamp with, “I used to get only 32¢ to appear on a stamp!”

Anatomy was mentioned by several entrants, a crucial factor according to George Schaetzle of Sheboygan, Wis.: “Don’t blame me if my music isn’t perfect. I only have one thumb and three fingers on each hand!”

For the nonphilatelic part of the contest, Dale Stout of Colorado Springs, Colo., wins the prize with a line appropriate to a musical rabbit.

In the philatelic part of the contest, the honor goes to Peter Karpoff of Silver Spring, Md., for the entry “Just like a diamond, a wabbit is forever!”

“I heard a rumor that the cost of a stamp might go up to 88 cents?!” from Michael Tremel of Leland, N.C.

“From one stamp to 10: We rabbits do multiply rapidly!” by Steve Kotler of San Francisco, Calif.

“Hey, Doc, what do you get when you drop a piano down a mine shaft? A-flat miner!” from John Lauck of Ruston, La.

“How about some Merrie Melodies?” by Levin Messick of Yorba Linda, Calif.

“I’m getting in toon,” from David Cohen of Rockville, Md.

“I will now play, ‘My Bunny Lies Over The Ocean’ by Peter Ilyich Cottontail,” from Mike Shefler of Gibsonia, Pa.