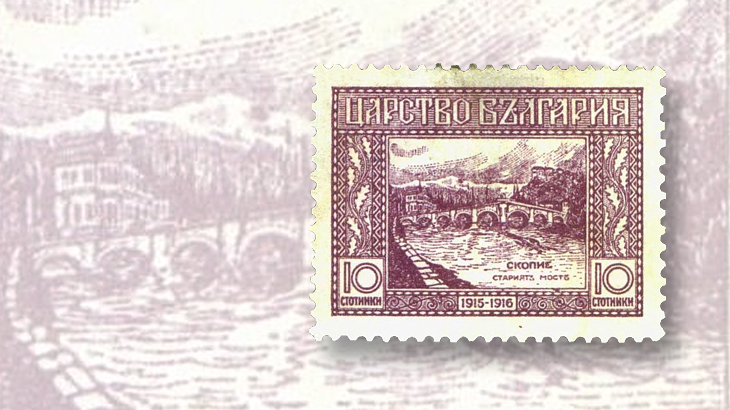 The bridge over the Vardar River appears on Bulgaria Scott 156. This area also was no longer part of Bulgaria in 1921. 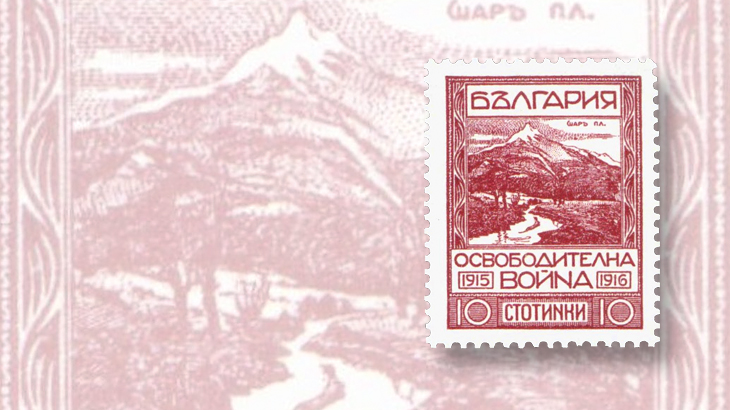 This stamp (Scott 155) from the 1921 set shows Mount Shar, which at that time was in territory that no longer belonged to Bulgaria. 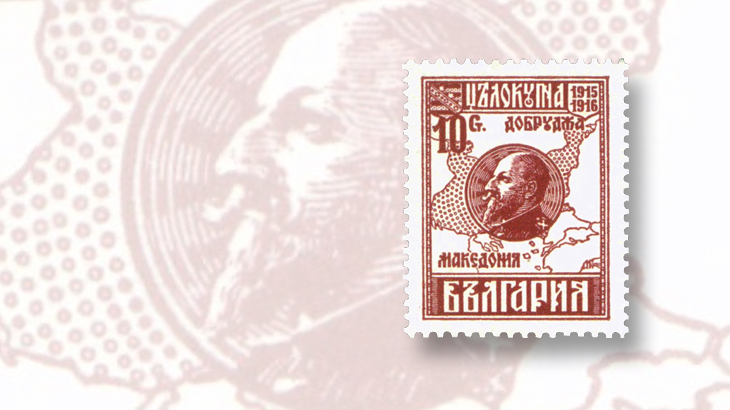 Printed during World War I but not issued until 1921, this Bulgaria stamp depicted the highly disliked former czar, Ferdinand I, and enraged the nearby countries shown on the map as still belonging to Bulgaria. 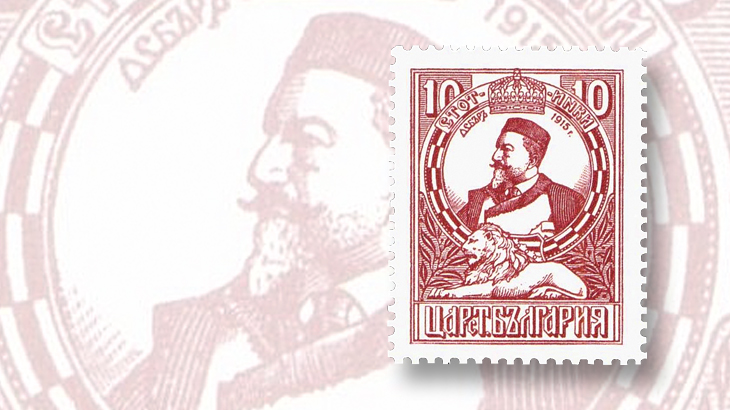 The second stamp in the five-stamp set of 1921 also showed the unpopular Czar Ferdinand I, who was compelled to abdicate in 1918 in the wake of the country’s defeat in World War I. 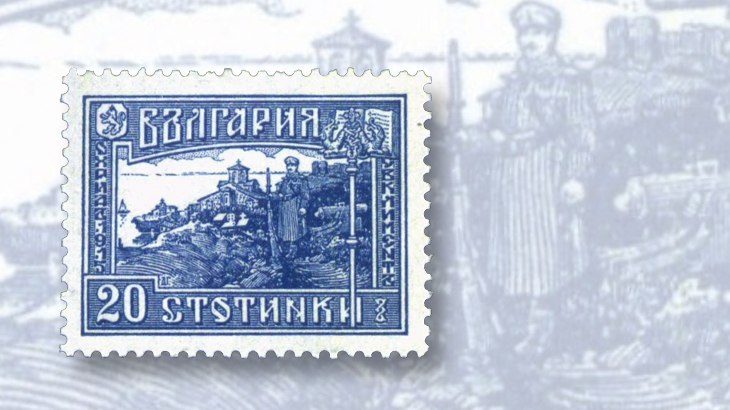 Neighboring countries of Bulgaria viewed as incendiary this stamp (Scott 157) and the preceding two showing places that Bulgaria lost after World War I. The Allied powers forced withdrawal of the stamps.
Previous
Next

A set of five Bulgaria stamps with the printed dates of 1915-1916 was not issued until 1921. One might call them error stamps, although they reflected errors of politics rather than printing.

Exhausted by defeat in the Second Balkan War in 1913, Bulgaria’s czar, Ferdinand I, at first avoided involvement in World War I. But in 1915, Ferdinand decided to join the Central Powers (Germany, Austria-Hungary and Turkey). His reward was to be the land of Macedonia, which was then divided between two Allied countries: Greece and Serbia.

At first, Bulgaria made territorial gains, but by mid-1918 the czar’s decision to enter the war had clearly been a grave mistake.

Allied armies based in Greece repulsed the Bulgarians, and the Central Powers were on the edge of defeat.

Ferdinand abdicated in favor of his son Boris on Oct. 4, 1918, more than a month before the war ended Nov. 11.

In the end, Bulgaria gained nothing of Macedonia, and lost parts of other territories.

Another set of stamps to mark the expected victory in Macedonia, inscribed with the dates 1915 or 1915-1916, was ordered from a German printer.

Delivery of the latter stamps was delayed, and amid Bulgaria’s defeat and the collapse of Imperial Germany, the stamps were forgotten.

In 1921, Bulgarian post offices almost ran out of stamps while awaiting a shipment of new stamps from a British printer.

At this point, about six years after they were ordered, the long-delayed wartime stamps from Germany were delivered.

Using these old stamps was thrifty, but politically and diplomatically unwise for Bulgaria.

Scott 153 shows a map of “Greater Bulgaria” in the background of the design.

This map includes vast swatches of territory that, after 1918, belonged to Romania, Greece and Yugoslavia.

The other three stamps in the set (Scott 155-157) further stirred international indignation by portraying scenes in the conquered lands that Bulgaria lost after the war.

The neighboring countries of Bulgaria denounced the controversial stamps as incendiary propaganda, and at the insistence of the Allied powers, Bulgaria was compelled to withdraw the five stamps after they had been on sale for only three weeks.

The much delayed appearance of the stamps and the emotional reaction to them that led to their quick removal make these issues tangible reminders of the earthshaking changes that World War I brought to Europe.