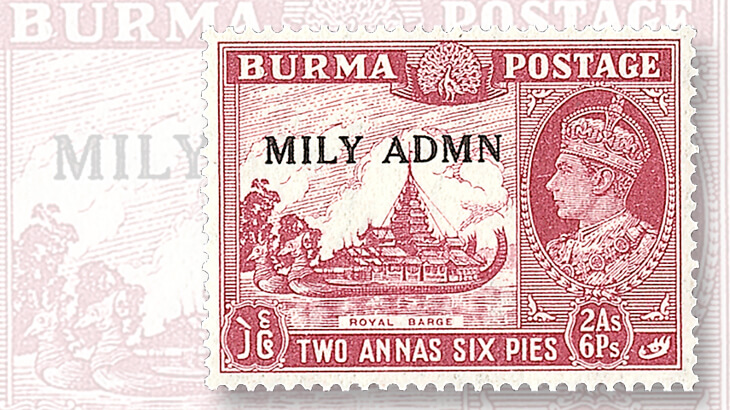 The Burma post-World War II set of 16 Military Administration overprinted stamps (Scott 35-50) is popular with collectors and a good buy in mint never-hinged condition at around $8.

Burma (officially the Republic of the Union of Myanmar) hasn’t had a lot of luck since gaining its independence from the British Empire in 1948.

In the 16th century, Burma controlled the largest empire ever assembled in southeast Asia.  After the empire collapsed in 1599, Burma became the prize in a series of struggles between rival imperial powers.

After three wars in the 19th century, the British won out. Burma was placed under the administration of the British Raj (imperial government of India), but the Burmese resented the Indians running their country on behalf of the British. On April 1, 1937, Burma became a separate colony, issuing its first stamps on that date.

The military, which has ruled the country since a coup in 1962, is dominated by the Bamar, one of the seven major ethnic groups in Burma. Many of the other ethnic groups have been in a constant state of war with the military government.

It was the military government that changed the country’s name to Myanmar in 1989. However, that name change was not recognized by the other ethnic groups or by many foreign countries.

The military government officially ended in 2011, and free elections were held in 2015. Tension remains between the new civilian government and the military.

Burma was invaded and conquered by the Japanese in World War II. After the Japanese were expelled, a British military administration temporarily took control of the country. The 16-stamp pictorial set of 1938-1940 (Scott 18A-33) were overprinted “MILY ADMN” (Scott 35-50).

The 2017 Scott Standard Postage Stamp Catalogue values the overprinted set at $8.80 in mint never-hinged condition and at $15.50 in used condition, with the value for used stamps in italics.

This is a perfect example of the old, long, inexpensive definitive sets that many collectors love. With this set, you can own a great deal of history for very little money.