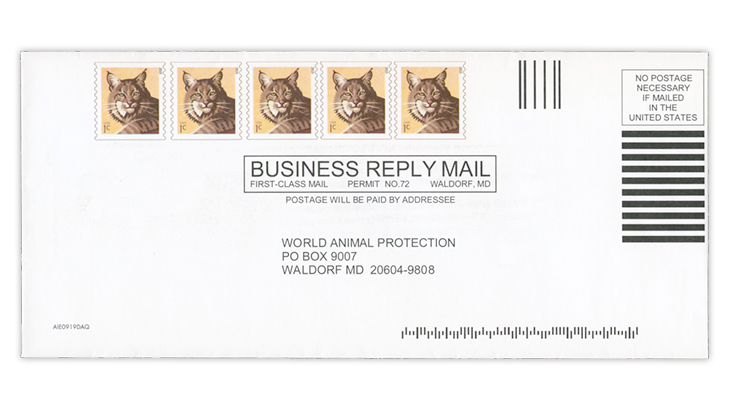 According to the United States Postal Service, the five 2015 1¢ Bobcat coil imprints at top left on this charity business reply mail envelope could be considered a form of counterfeiting and are not valid for postage.

Closer inspection reveals that the stamps are imprints of the Bobcat coil with a “2015” year date in the top right margin (Scott 4672a). The printed images likely were added when the envelope was produced.

Linn’s examination also shows that these imprints are convincing reproductions of the 1¢ Bobcat stamp design. The vertical serpentine die cuts of each imprint closely mimic those of the real stamp, which was printed by Ashton-Potter, one of the U.S. Postal Service’s contract printers.

Note that the five imprints are not equidistant from one another. The gap between the first and second imprint, for example, is noticeably wider than the gap between the fourth and fifth imprint. This provides an added measure of realism to the overall appearance of the imprints.

For many years numerous charitable organizations have affixed stamps to their business reply mail envelopes to encourage recipients to mail in a donation. In general, donor response rates confirm that this practice is effective.

However, this World Animal Protection envelope represents a new approach, one that Linn’s has not seen before.

In a short note accompanying the envelope, the Linn’s reader posed an urgent question: “Is this legal!?” Linn’s contacted Postal Service spokesman Roy Betts in Washington, D.C., for an answer.

Betts replied Nov. 1, stating that the 1¢ Bobcat imprints on the World Animal Protection business reply mail envelope represent an “improper use of USPS controlled intellectual property and is not valid for postage.”

“It also violates Federal guidelines for the reproduction of stamps and currency and could be considered counterfeiting,” Betts said.

World Animal Protection, formerly known as the World Society for the Protection of Animals, is a U.S. registered charity with headquarters in New York City, according to the charity’s website.

World Animal Protection did not respond to Linn’s request for additional information about the 1¢ Bobcat imprints.

New 1¢ Bobcat coil on the prowl