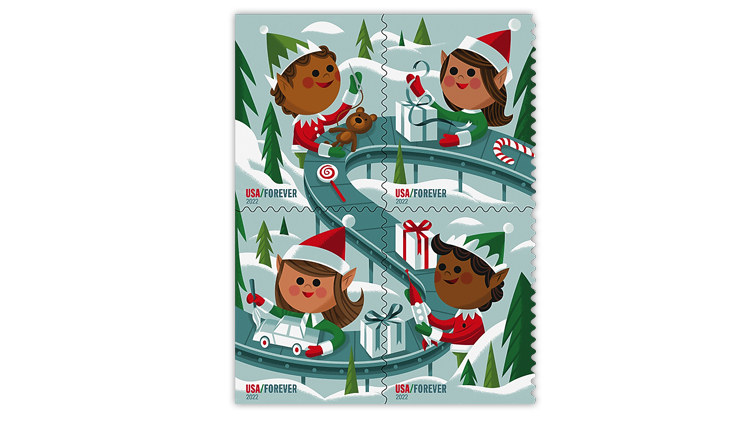 Don Clark of Maple Valley, Wash., was the artist for the United States nondenominated (60¢) Holiday Elves forever stamps to be issued Sept. 15 in North Pole, Alaska, a suburb of Fairbanks. A total of 30 million doubled-sided panes of 20 were printed for s

The stamps, arranged as a se-tenant (side-by-side) block of four, will be issued in double-sided panes of 20. The Postal Service refers to this format as a booklet because selvage strips on both sides of the pane can be removed to facilitate folding into a compact size that is easily carried in a purse or wallet.

Nonetheless, collectors prefer to leave the selvage strips on double-sided panes intact to make it easier to mount the pane in an album.

The Holiday Elves first-day ceremony is open to the public and will be held outside. A registration form is available online. There is no limit on the number of attendees per individual registrant, according to the Postal Service.

Santa sends personalized letters from the Santa Claus House each December, and millions of children have received these letters in the past 60 years.

More information can be found on the Santa Claus House website.

The overall design of the se-tenant block of four pictures a colorful illustration of four cheerful elves stationed along a conveyor belt “preparing toys on a winding conveyor belt in a snow-laden forest,” the USPS said.

The stamp in the upper left features an elf sewing a tiny teddy bear in the Postal Service’s preliminary artwork, shown here.

The elf on the stamp in the upper right is shown embellishing a wrapped gift with blue ribbon, while the elf on the lower left stamp is seen painting the finish details on a blue and white model car with red hubcaps.

A slender model rocket in shades of red, white and blue is being examined by the elf on the stamp in the lower right.

Clark’s artwork might be familiar to some Linn’s Stamp News readers because it has appeared on gift cards and artwork on display at Target department stores.

Clark is the co-founder of Invisible Creature, an award-winning design studio headquartered in Seattle.

In addition to Target, Clark has worked with Apple, Lego, NASA, The New York Times and Pixar.

To read the rest of this story about the upcoming Holiday Elves stamps, subscribe to Linn’s Stamp News.