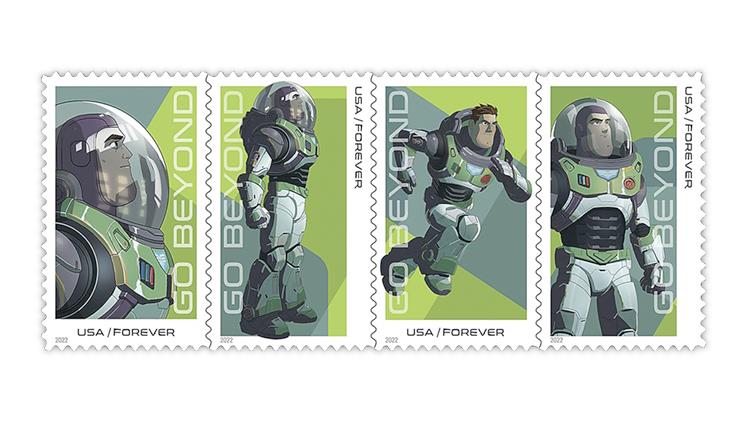 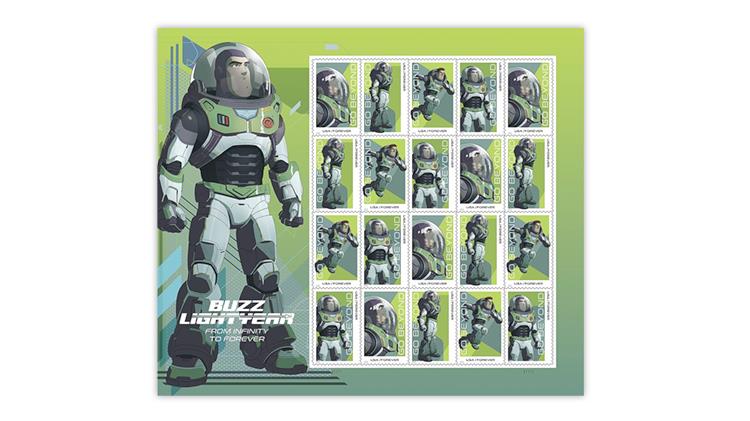 Sold as a pane of 20 stamps, the Go Beyond issue shows a full-bodied image of Buzz Lightyear in the selvage of the pane. Greg Breeding designed the stamps using artwork provided by Pixar Animation Studios.
Previous
Next

Buzz Lightyear, the action figure and space ranger from the Toy Story movie franchise, stands ready on a pane of 20 nondenominated (60¢) commemorative forever stamps to be issued by the United States Postal Service Aug. 3 in Los Angeles, Calif.

The Postal Service first announced the Go Beyond: Buzz Lightyear stamps in a surprise unveiling at the June 8 red-carpet premiere of Disney and Pixar’s Lightyear movie.

Lightyear, which premiered nationwide June 17, is a spin-off of the popular Toy Story movie franchise. Buzz Lightyear, one of the main characters of the franchise, stars in the movie.

“The sci-fi action-adventure movie gives audiences insight into Buzz’s past and brings to the big screen the intergalactic exploits of the hero,” the USPS said.

A first-day ceremony for the Go Beyond stamps will take place Aug. 3 at 9 a.m. at the El Capitan Theatre, 6838 Hollywood Blvd., in Hollywood, Calif. The Walt Disney Co. owns this theater, which serves as the venue for the majority of the studio’s premieres.

Linn’s Stamp News reported July 11 that the ceremony will take place Aug. 3 at 11 a.m. The start time has since changed to 9 a.m.

The selvage of the pane displays the full figure of Buzz standing in the same pose as the stamp with the cropped image of him facing forward. Text in the selvage gives the character’s name along with the slogan “FROM INFINITY TO FOREVER.” A design of a flying spaceship crosses through the word “Lightyear.”

Art director Greg Breeding designed the stamps. In doing so, he worked closely with Pixar Animation Studios, using artwork provided by the studio.

Buzz first hit the screen in the first installment of the Toy Story movie franchise in 1995. Sequels followed the original movie in 1999, 2010 and 2019.

The Toy Story franchise has also expanded to other media, including television series and specials, short films, plays, video games, comic books and a musical.

The new animated sci-fi action-adventure movie Lightyear serves as Buzz’s definitive origin story. The movie follows Buzz as he’s forced to find a way back home after being stranded 4.2 million light-years from Earth. ...

To keep reading this story about the new Go Beyond: Buzz Lightyear stamps, subscribe to Linn’s Stamp News.