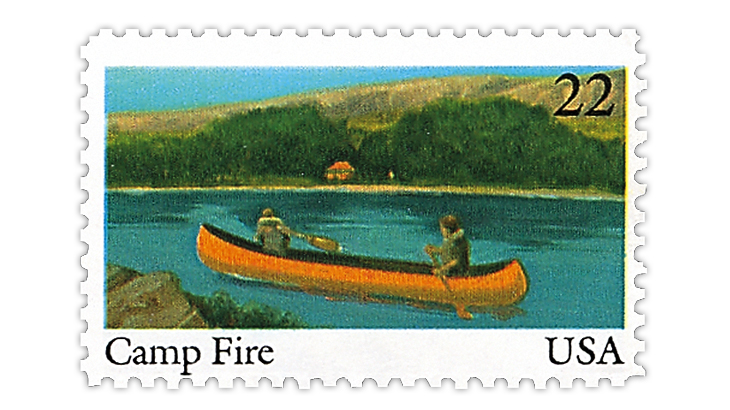 The cartoon caption contest stamp for April is the 1985 22¢ Camp Fire Inc. 75th anniversary commemorative. Entries must be received by April 26 for a chance to win a prize.

Paddling a canoe as pictured in the design of the 22¢ Camp Fire stamp can be a precarious enterprise unless the paddlers are practiced.

Since Camp Fire is a scouting-type organization, it has to be assumed that the two young people in the canoe know what they are doing.

This stamp (Scott 2163), one in a block of four issued Oct. 7, 1985, for International Youth Year, will serve as the cartoon caption contest stamp for April.

Camp Fire Girls was founded in 1910. In 1975, the organization began to admit boys as well, changing its name to Camp Fire Boys and Girls. It is now called Camp Fire.

A 1960 4¢ commemorative stamp was issued for the 50th anniversary, and it shows the Camp Fire Girls name.

You are invited to put yourself in the life jacket of one of the young adults in the canoe shown on the 1985 stamp and consider what you might be thinking or saying as you enjoy the calm waters of the river.

You can address the Camp Fire movement, the river scene, the change from an all-girls entity to coed, the politics of the era, stamp collecting, or anything else you think is appropriate.

For each winner, the prize will be a 13-week subscription to Linn’s (a new subscription or an extension). Entries must reach me no later than April 26.