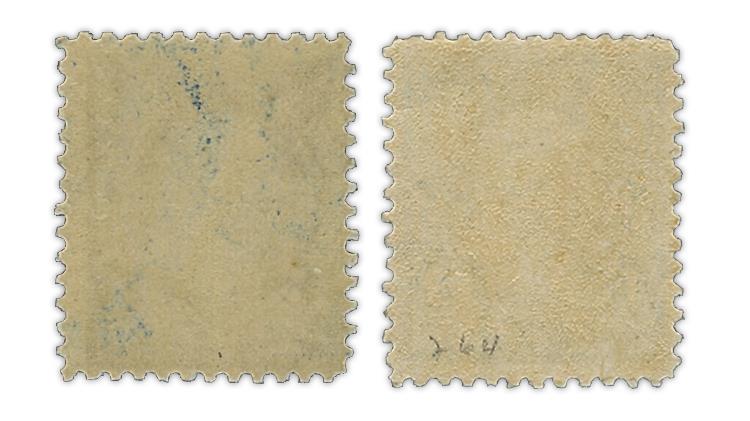 Figure 1. The stamp on the right is regummed. Compare it to the normal example at left. The gum is grainy, not smooth and the wrong color. Plus it has soaked through some of the perforation tips. 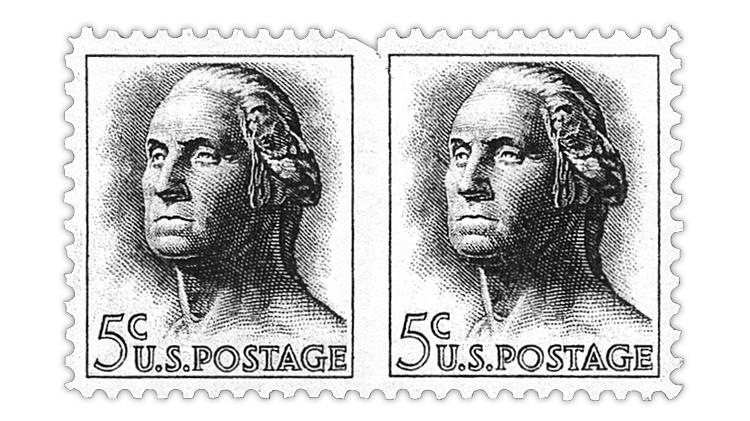 Figure 2. This pair of 5¢ George Washington stamps was submitted as vertically imperf between. Does it matter that there is just a bit of paper missing at the top of the imperf area? 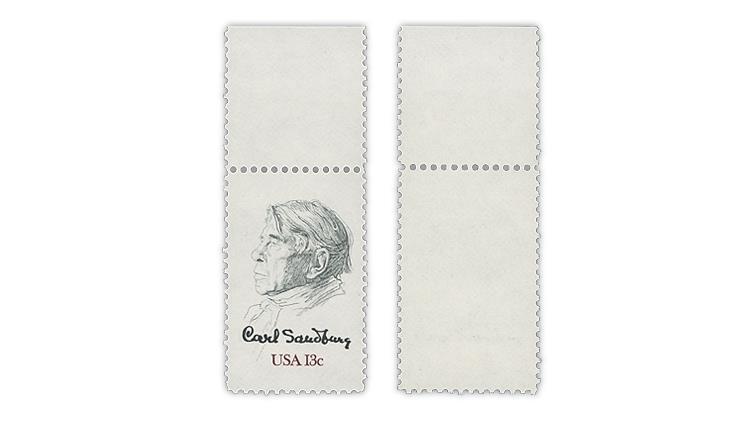 Figure 3. Both these stamps are 1978 13¢ Carl Sandburg commemoratives, but the one that looks blank was printed by a plate that had not been properly inked so that the colors appear to be missing.
Previous
Next

A recent bit of correspondence contained a sentence that left me thunderstruck: “I wish there were an expertizing enterprise that operated on the basis of fact, not opinions.” What utter nonsense!

Facts rule the expertizing process, and they are sought as the basis for decisions in every case. But too often they take the expertizer just so far and no further. I would estimate that in every batch I receive for expertizing, fully one-third of the patients (as expertizers call the items to be examined) require a determination based upon interpreting factual observations or findings that are the result of educated experience.

It is doubtful that many users of expertizing services would be happy with a “no opinion” rate of more than 30 percent because the opinions of experts could not be credited.

What kind of patients are we talking about? Here are three examples.

Situation 1. For purposes of our example, let’s say a collector submits a mint United States stamp asking for a finding that it is genuine in all respects. This includes not only determining that the stamp itself is genuine, but that the perforations are genuine, that there is no hidden damage, and that the gum is original and undisturbed.

All of these issues are matters of fact, and some are easy to establish. For instance, the design matches a known genuine example and was printed by an engraved plate. There is almost no opinion in that finding; it is a fact.

The perforations are a perfect match for those found on normal examples and on perf gauges. Except for a nibbed perf in the lower right corner, they are shaped as would be expected from the type of perforating used and exhibit the characteristics to be expected. Again these are factual findings, but we are not out of the woods yet.

The gum appears to be original and undisturbed under normal lighting and no magnification. But a closer look is needed. While the art of regumming has advanced to a point where a careful job can be almost undetectable, most regumming can still be detected. Exceptions to this include repairs or improvements, such as erasing evidence of a prior hinge.

So the expertizer sets to work examining the gum. Knowing that perforations are punched after the gum is applied, he looks to see if new gum has soaked into the paper tips around the perforation holes and whether the gum is discolored, the wrong consistency or has a pattern that is not routine for the issue. He also looks to see if the gum has been loosened and respread to cover a hinge mark or other flaw.

An example of a regummed stamp is shown in Figure 1. Here the detection of alterations becomes as much art as science, and the expertizer’s experience is critical.

Looking at the perf tips at the top of the stamp under 30x to 60x magnification and at the gum below, our expertizer thinks he sees a gum repair where there was a hinge. He is not 100 percent certain, but he includes a note to that effect with his finding. This will tip the next expertizer who examines the stamp to pay special attention.

Of the experts who review this patient, two reach the same conclusion and one sees the same phenomena, but cannot conclude that it amounts to a gum alteration. They have not established for a fact that it is an alteration, but neither have they established beyond doubt that it isn’t.

What can result is a finding that the stamp is genuine (with fault stated), and an opinion declined on the matter of full original gum. That in itself will call it into question.

Or the certifying authority may, based on the weight of the findings, conclude that there appears to be an alteration of gum to cover a previous hinge. The latter is clearly an informed opinion, one that will not make the submitter happy but arguably better than leaving the question without any answer.

Situation 2. The pair of 5¢ George Washington stamps in Figure 2 was submitted as Scott 1213d, a horizontal pair imperforate between.

This variety is known to have resulted from the folding over of sheets of stamps that were to be cut into booklet panes. Thus, the imperf margin between the stamps was intended to be imperf as there were no perforations around the outside of a booklet pane.

A Scott 1213d pair is composed of parts of two panes. Each pane included five stamps plus a label at the top, two vertical rows by three horizontal rows. This pair is from the second row of two adjoining panes as the first row would have a label and the third row would have an imperf bottom. Those are the facts.

The question is whether the patient qualifies as Scott 1213d, and the complicating factor is the small bit of missing paper at the top of the imperf margin between the two stamps. Could that be ignored in order to reach a positive finding? The answer is no. The margin between the stamps is not full and complete.

The missing chunk of paper is a fact, but it is an opinion that it cannot be ignored. Conceivably another group of expertizers at another time might feel differently. But the finding today rests on today’s opinion.

Situation 3. Two examples of the 1978 13¢ Carl Sandburg commemorative are shown in Figure 3. On the left is the stamp as issued (Scott 1731). Next to it is an example that I own that seems to be the albino version (Scott 1731c), described in the Scott Specialized Catalogue of United States Stamps and Covers as “All colors omitted.”

A careful look under 10x magnification reveals a few black dots on the stamp. Are they disqualifying? The answer is yes, if the dots are in the areas that are printed on the normal stamp. It is possible to determine that because the stamp was printed from engraved plates on the Giori press. This means the design — even without any ink — can be felt and seen under magnification as it stands up in relief from the paper.

So the expertizer must determine where those dots are and form a judgment as to where they came from. They could be a minor ink splatter or the result of a tagging ghost. The latter could happen when a sheet of stamps with ink not fully dried deposited ink on the tagging roller, which might then deposit that ink on the next sheet through the process.

In the Figure 3 example, the dots are in the area where Sandburg’s signature would be, and under 30x magnification they seem to me to be remnants of printing. But they are not inconsistent with an ink splatter. So in the absence of 100 percent certainty (a fact), I rely upon my belief that a missing color error must be total, and my sense is that the few dots are not splatter. I must then conclude — my opinion — that this stamp does not qualify as Scott 1731c.

If the other experts who look at this stamp agree with me, it would receive a certificate saying that it is a printing variety with dots of black color present. Yet, being certain of my finding, I will not go to the expense of submitting it for further expertizing.

Hopefully, through these three examples, you see that 100 percent certainty can be an elusive goal. Thus, there is a role for art (and opinion) as well as science in expertizing.

The expertizer wants to reach correct decisions in every case and will spend the time looking at the patient, and do the study to apply as much knowledge and experience as it takes to do so. But for many patients, the finding will be an informed opinion rather than complete certainty.

While the bounds of science in expertizing are always advancing, I wish good fortune to anyone who thinks they can do away with informed opinion as a factor in reaching conclusions.