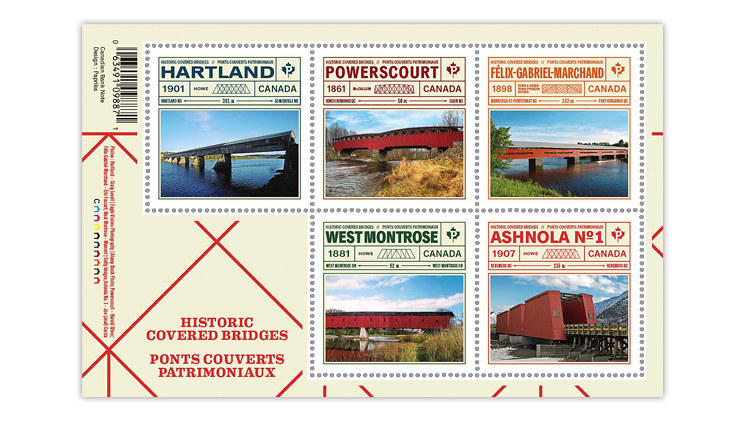 Canada Post features five historic covered bridges on stamps to be issued June 17 in a souvenir sheet of five (shown here) and a booklet of 10. 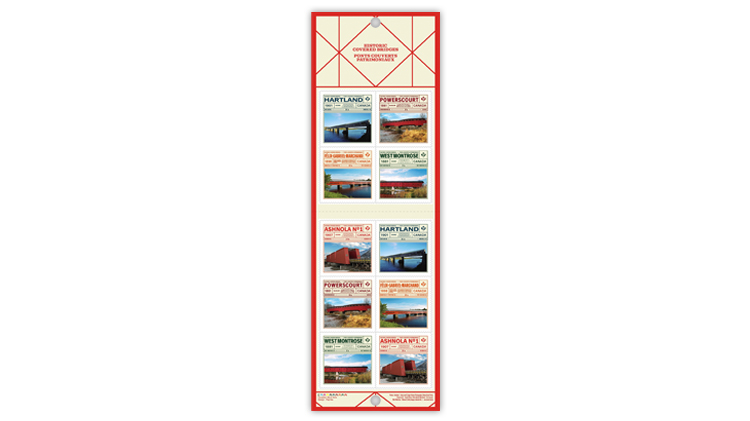 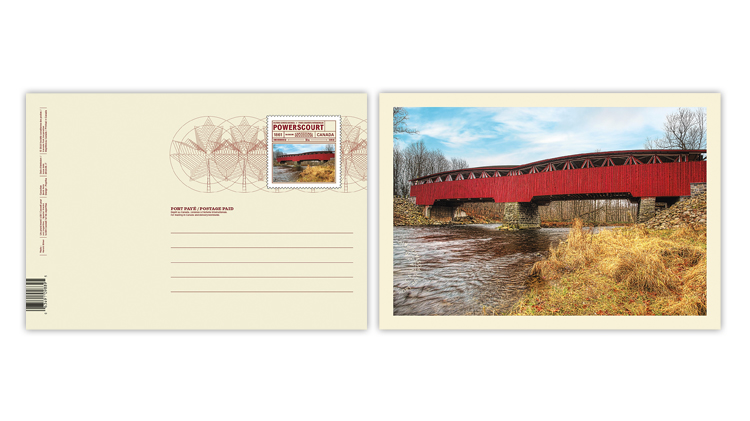 The postal cards include an image of the stamp imprinted on the address side and the photograph used for the stamp design on the other side. The postal card for Quebec’s Powerscourt Bridge is shown.
Previous
Next

Canada Post features the longest covered bridge in the world on a stamp to be issued June 17.

Located in Hartland, New Brunswick, the bridge over the Saint John River is 1,282 feet long.

Each stamp includes a photograph of the bridge, its name, the year it was built, its length in meters, the locations it connects and the type of trusses used.

For example, the inscriptions on the Hartland Bridge stamp reveal that it was built in 1901 (it wasn’t covered until 1922), it is 391 meters long, and it connects Hartland with Somerville, also in New Brunswick. The diagram between “1901” and “Canada” near the top of the design indicate that the bridge is held up by seven Howe trusses.

William Howe of Spencer, Mass., patented this truss design in 1840.

While there were 1,400 covered bridges in Canada at the end of the 19th century, today only an estimated 140 remain, according to Canada Post.

The oldest of these is Quebec’s Powerscourt Bridge, also known as the Percy Bridge, built in 1861. This red bridge over the Chateauguay River is pictured on one of the new stamps.

Canada Post said it “is the only known example of the McCallum inflexible arched-truss design that is still in existence.”

This type of bridge was patented in 1851 by Daniel McCallum, who was born in Scotland in 1815 and immigrated with his family to the United States in 1822.

Among other accomplishments, McCallum served as director and superintendent of the United States Military Railroad during the Civil War.

In chronological order, the three other bridges on the stamps are the West Montrose Bridge, opened in 1881; the Felix-Gabriel-Marchand Bridge, built in 1898; and the Ashnola No. 1 railroad bridge, competed in 1907 and rebuilt in 1926.

The West Montrose Bridge, which crosses the Grand River, is Ontario’s last remaining historic covered bridge. It was nicknamed the Kissing Bridge “due to the intimacy and privacy that the covered bridge offered,” according to the website of the Canadian Register of Historic Places (www.historicplaces.ca).

Quebec’s longest covered bridge, the Felix-Gabriel-Marchand Bridge over the Coulonge River is almost 500 feet long. Canada Post described this bridge as "unique in the province for its combination of Queen Post and Town lattice trusses.”

Canada Post said of British Columbia’s only remaining historic covered bridge: “ … the Ashnola No. 1 Bridge carried the Great Northern Railway over the Similkameen River near the town of Keremeos after it opened in 1907. The bridge was rebuilt in 1926 with its Howe trusses sheathed in wood panelling and the overhead cross-bracing left exposed. The railway tracks were removed in 1954, and the bridge was converted for vehicle traffic in 1961.

Paprika, a graphic design and strategic marketing firm based in Montreal, Quebec, designed the stamps. The photographs featured on them were taken by Craig Lovell (Hartland), Harold Stiver (Powers­court), Eric Foucart (Felix-Gabriel-Marchand), and Joe (Jose) Garcia (Ashnola No. 1). The photograph of the West Montrose Bridge is attributed to Moment, Getty Images.

Canadian Bank Note printed the stamps by lithography in booklets of 10 and a souvenir sheet of five with the designs se-tenant. The stamps are 38 millimeters by 38mm each, and the souvenir sheet is 134mm by 86mm.

Each postal cards includes an imprinted stamp on the address side and a photograph of the bridge on the other.

The new Historic Covered Bridges stamps and related items are available from Canada Post at www.canadapost.ca/shop, and by mail order from Canada Post Customer Service, Box 90022, 2701 Riverside Drive, Ottawa, ON K1V 1J8 Canada; or by telephone from the United States or Canada at 800-565-4362, and from other countries at 902-863-6550.