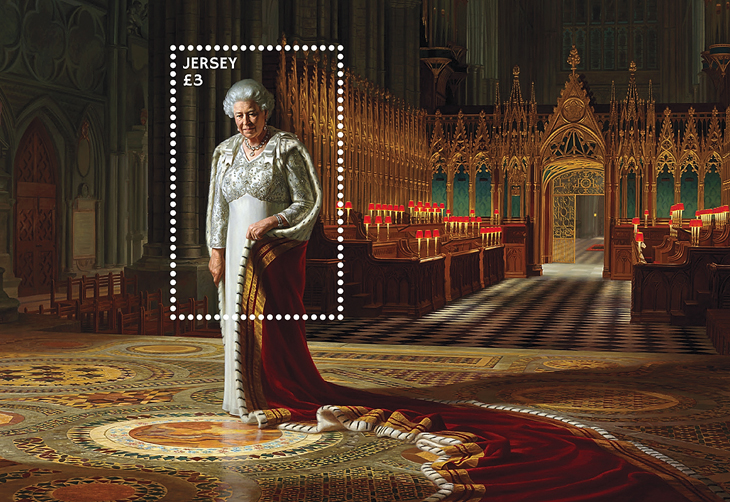 A souvenir sheet issued Sept. 9 by Jersey Post reproduces Ralph Heimans’ oil painting The Coronation Theatre: A Portrait of Her Majesty Queen Elizabeth II, created for the diamond jubilee in 2012. The sheet is printed on silk. 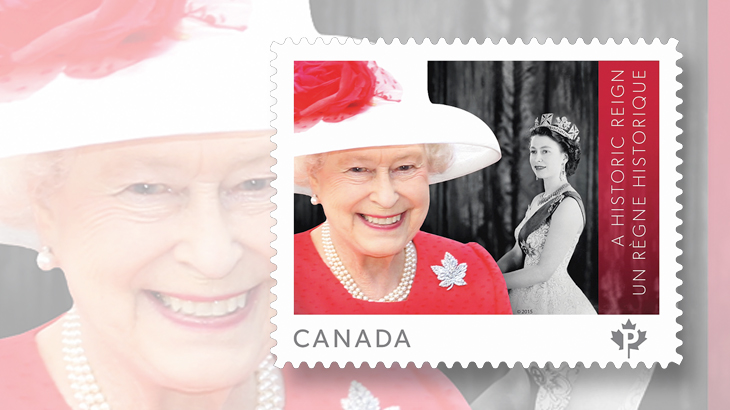 Photographs of Queen Elizabeth II taken in 1953 and 2010 are shown on Canada’s permanant-rate stamp honoring the historic reign of the queen. 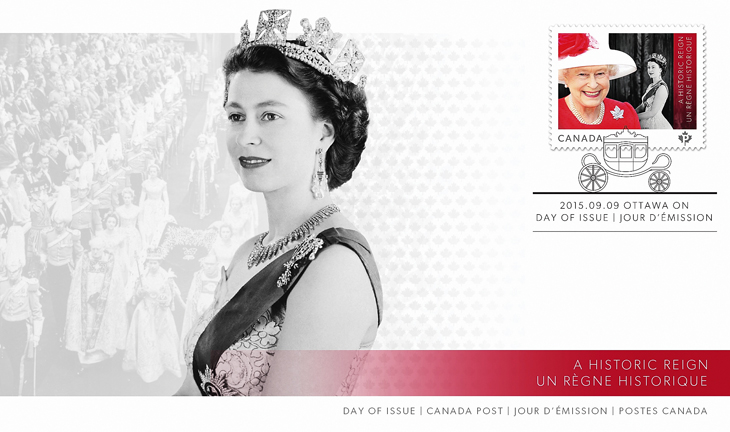 Canada Post’s first-day cover is canceled in Ottawa, Ontario, with a cancel showing a royal carriage. The cachet depicts a scene from the 1953 coronation. 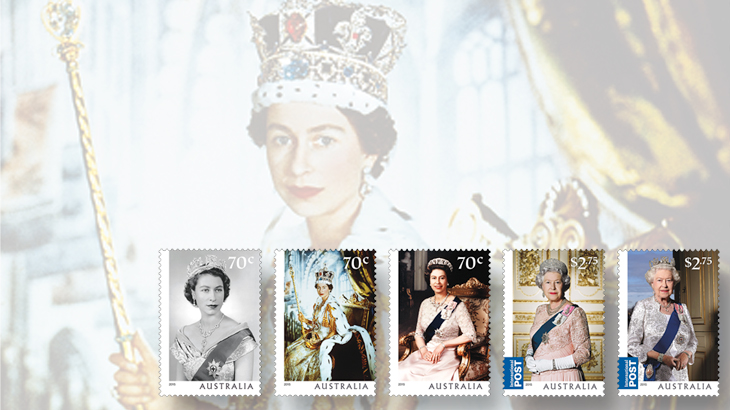 To commemorate Queen Elizabeth II as the longest-reigning British monarch, Australia Post issued five stamps showing formal photographic portraits of the queen representing key moments in her reign, from her accession to the throne in 1952 to her diamond
Previous
Next

Queen Elizabeth II became the longest-reigning monarch of the United Kingdom on Sept. 9, exceeding her great-great-grandmother Queen Victoria’s reign of 63 years and 216 days.

Canada, Australia and Jersey issued stamps on that day to celebrate the occasion.

Canada Post kept its stamp a secret until the last minute, unveiling it to the public on the Sept. 9 issue date. The stamp was issued in booklets of 10.

Canada Post president and CEO Deepak Chopra said, “Our stamps not only depict past history, often they celebrate events in the making. This is just such an event — and we are proud to have the opportunity to honour Her Majesty as well as her remarkable record of service to Canada and all Canadians.”

Too emphasize the length of the queen’s reign, the stamp depicts photographs from two centuries.

The first is from her coronation in 1953, and the second was taken during 2010 Canada Day celebrations in Ottawa.

In the latter, the queen is dressed in Canada’s official colors of red and white. She also is wearing a diamond maple leaf broach presented to her mother during a 1939 tour of Canada.

Unlike Canada with its single stamp, Australia and Jersey each issued five stamps to represent the six decades of the queen’s reign.

The stamps from Australia Post reproduce formal photographs showing the queen from age 25 to age 85.

Born April 21, 1926, the queen was 25 when she ascended to the throne Feb. 6, 1952, upon the death of her father, King George VI. The official photograph taken by Dorothy Wilding a few weeks later, on Feb. 26, is shown on the first of Australia’s three 70¢ domestic-rate stamps.

The next stamp reproduces the coronation portrait photographed June 2, 1953, by Cecil Beaton.

Sonia Young of Australia Post Design designed the five stamps. RA Print produced them by offset lithography in sheets of 50.

In addition to these stamps, Australia Post issued a souvenir sheet containing the five stamps se-tenant, a pane of five of self-adhesive versions of the $2.75 stamps, and a 36-page prestige booklet with images and text.

Three of the stamps from Jersey feature the same or similar photographs as those shown on the Australia stamps: the coronation on the 47-penny denomination, the golden jubilee on the 71p, and the diamond jubilee on the £1.25.

The remaining stamp is a £3 denomination sold in a souvenir sheet of one, printed on silk. The stamp and the surrounding selvage reproduce Ralph Heimans’ oil painting The Coronation Theatre: A Portrait of Her Majesty Queen Elizabeth II, created for the diamond jubilee in 2012.

Westminster Abbey, which acquired this 9-foot-by-11-foot painting in 2013, describes it as showing “an imagined scene set at night in Westminster Abbey showing The Queen in a moment of solitary reflection. …”

Another souvenir sheet from Jersey includes the four stamps se-tenant.

Cartor Security Printing printed the stamps by offset lithography in panes of 10, and also printed the souvenir sheets.

Canada Post products are available online. Also, stamps and FDCs are available by mail order from the National Philatelic Centre, Canada Post Corp., 75 St. Ninian St., Antigonish, NS B2G 2R8, Canada; or by telephone from the United States and Canada at 800-565-4362, and from other countries at 902-863-6550.