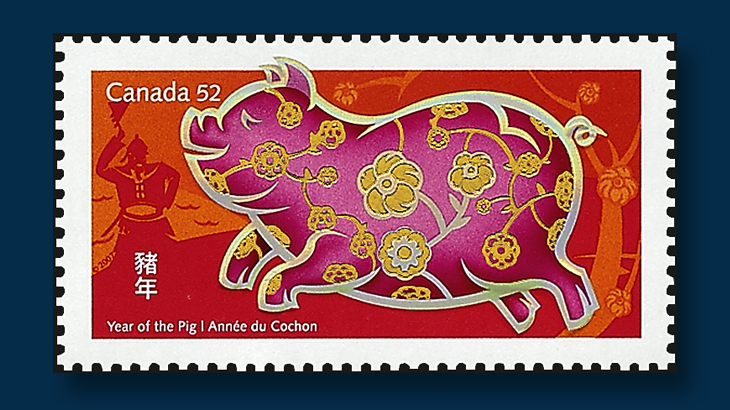 Canada Post celebrated the Year of the Pig with stamps issued Jan. 5, 2007. New stamps will be issued for the year of the pig that will begin Feb. 5, 2019.

Canada Post offers what it calls a “sneak peek” of its 2019 stamp program in the October-November issue of Details, its magazine for collectors.

The program will start Jan. 14, 2019, with new definitive (regular-issue) stamps, including a Queen Elizabeth II definitive and a set in the From Far and Wide series that was introduced earlier this year, on Jan. 15.

In addition, Canada Post will welcome the Year of the Pig with new stamps slated to be Jan. 18.

The Black History series, which began in 2009, will continue in February with a stamp or stamps honoring Albert Jackson, the first black Canadian letter carrier.

According to a historical plaque in Toronto, Ontario, Canada, honoring Jackson, he was “born into slavery in Delaware during the late 1850s.”

When he was a toddler, he escaped with his mother and six siblings from the United States to Canada via the Underground Railroad.

He was appointed a letter carrier in Toronto in 1882 and worked for the post office for 36 years until his death in 1918.

Also scheduled to be released in February are stamps featuring gardenias as part of the Flower series and an issue commemorating the Vancouver Asahi baseball team. This amateur team was formed in 1914 and was disbanded in 1942 when its members were among the Japanese-Canadians interned by Canada in World War II.

Other commemoratives in 2019 will pay tribute to Canadian ingenuity in aviation, the Red River Resistance of 1869-70 and the founding of Manitoba.

Bears and endangered turtles will be featured on two separate issues, while another two issues will depict historic covered bridges and desserts, respectively.

Ending the year will be the Community Foundation semipostal issue and both sacred and secular stamps celebrating Christmas.