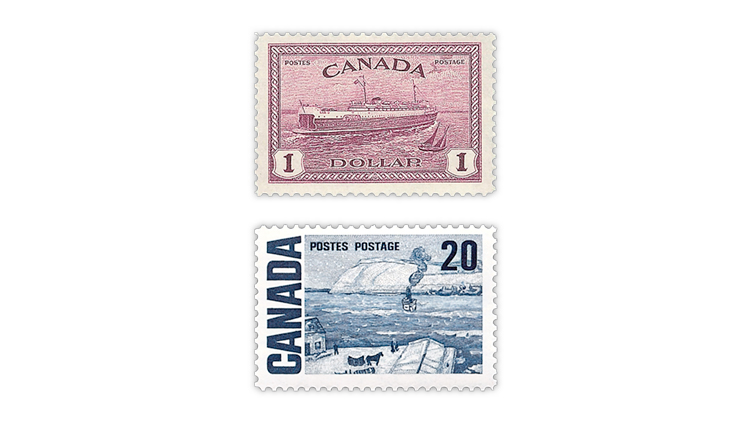 Canada Post announced that its 2023 stamp program will feature an issue celebrating ferries. Other stamps from Canada that show ferries include a 1946 stamp showing a train ferry and a 20¢ definitive depicting The Ferry, Quebec by James Wilson Morrice.

Canada Post announced details of its 2023 stamp program in a Dec. 21 press release.

“The 2023 Canadian stamp program will celebrate some of the country’s most accomplished individuals, historic milestones, and the holidays that bring communities together,” Canada Post said.

Notable among the 2023 stamps will be the issuance of the first definitives honoring King Charles III, who was named Canada’s head of state Sept. 10, 2022.

Although Canada became independent, leaving the British Empire, in 1982, it remains a member of the British Commonwealth.

A Sept. 10, 2022, article from the Reuters news agency said that Canada proclaimed Charles its king during a formal ceremony held at the official residence of Governor-General Mary Simon, “the monarch’s representative in Canada who performs the duties of the head of state on behalf of the crown.”

Prime Minister Justin Trudeau and Simon signed an order naming Charles as the new sovereign, the proclamation was read by Canada’s chief herald, and a 21-gun salute ended the ceremony, according to the article.

Canada Post announced other individuals who would be featured on stamps in its 2023 program, though it did not provide names.

One stamp will celebrate a “hockey pioneer who broke boundaries and gave back to his sport and community,” and another will honor a Canadian in the Resistance during World War II.

Canada Post did not announce issue dates, but in recent years it has commemorated military subjects on stamps issued close to Remembrance Day (Nov. 11).

In 2023, Canada Post will again issue stamps to commemorate the Sept. 30 National Day for Truth and Reconciliation, which recognizes children who never returned from Indian residential schools, those who survived, and the families and communities involved.

The postal agency issued the first set of stamps in 2022 for this series. Three of the four stamps in the se-tenant (side-by-side) block of four showcase First Nations, Inuit and Metis artists.

Quebec activists and trailblazers will be honored on a 2023 stamp issue, according to Canada Post, but the press release does not name these individuals.

Canada Post also announced a stamp issue for the ferries “that charm tourists and serve commuters across Canada.” Other stamps from Canada that show ferries include a 1946 stamp showing a train ferry (Scott 273) and a 20¢ definitive depicting The Ferry, Quebec by James Wilson Morrice (464), issued as part of a 1967-72 series.

A set of six stamps are simply said in the press release to “demonstrate how a picture is worth a thousand words.”

The stamps in the annual spring Flower issue will picture ranunculus, “a favourite of gardeners and the soon-to-be-wed,” Canada Post said. Flowers in the ranunculus genus are often known as buttercups. These stamps will be issued in March.

The 2023 program will see another fundraising stamp issued for the Canada Post Community Foundation, which supports children and youth. Canada Post started this annual semipostal series in 2012.

“Annual Christmas and holiday stamp issues will celebrate the Nativity story and creatively depict the beauty of the Canadian winter,” Canada Post said. In addition, the program will include stamps celebrating Eid, Diwali and Hanukkah.

“Canada Post is proud of its role as one of Canada’s storytellers,” the press release said, adding that the committee responsible for recommending subjects to the annual stamp program “relies on thoughtful input from groups and individuals to choose subjects that are meaningful to all Canadians.”